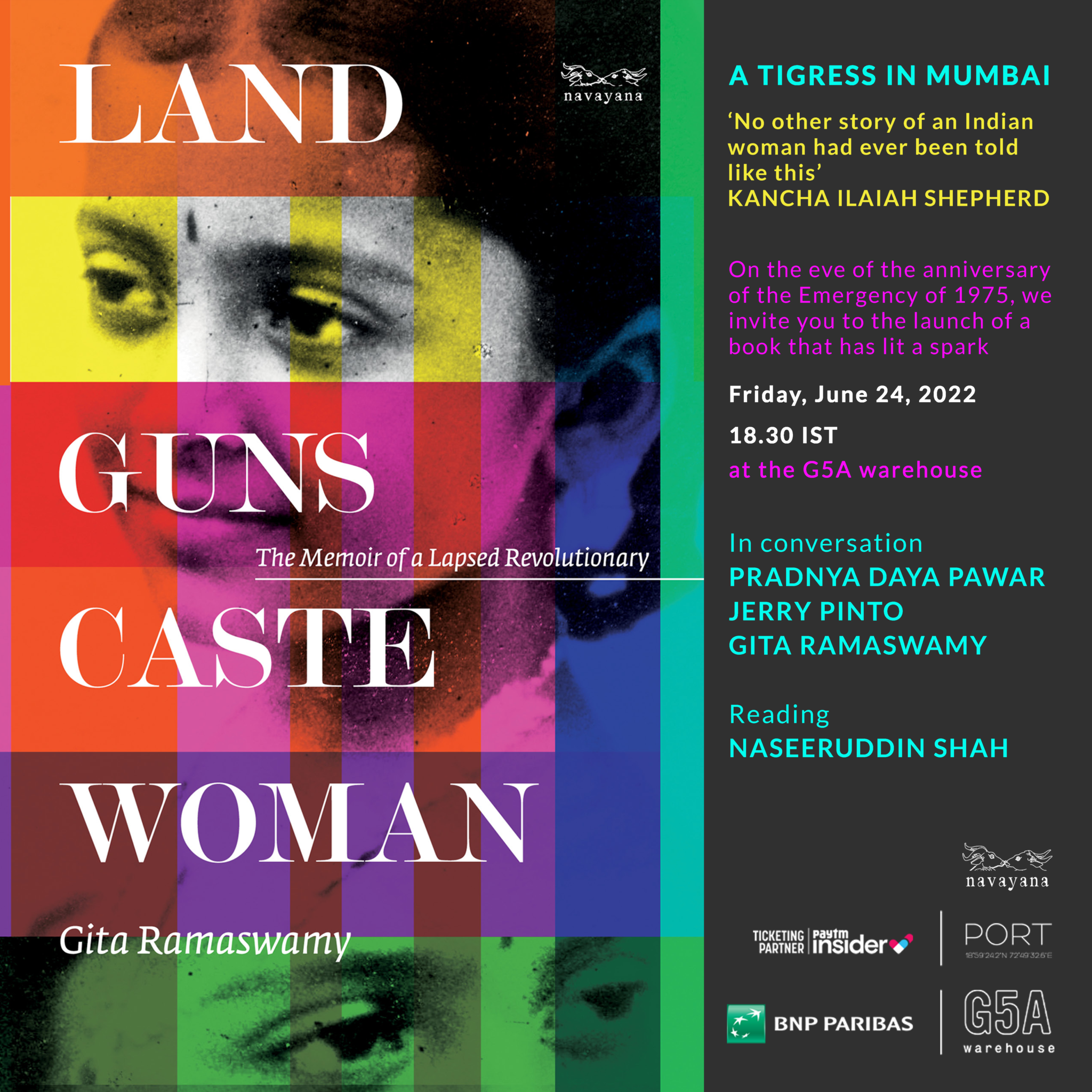 A Tigress in Mumbai

Gita was born into the conservatism of a brahmin household. Here, women were kept on a short leash. But hers was a rebellious heart. She defied the sanctimony at home, and joined the Naxals. Here, she saw the intransigence and duplicity of an out-of-ouch leadership. She suffered the Emergency, saw her comrades jailed or killed, only to leave the party disillusioned. This was when she met landless dalits in Telangana, caught between a reddy and a hard place. They were in bondage, cheated out of land and all rights. They were in the mood to fight. Together, they take on the tyrannical landlords who brutalized the villages for generations. A revolution without a gun was in the making.

Join the writers Jerry Pinto and Pradnya Daya Pawar in conversation with Gita on the twenty-seventh anniversary of the declaration of the Emergency. Actor Naseeruddin Shah will present a reading from Land, Guns, Caste, Woman.

Navayana is an independent anti-caste publishing house. It publishes general and academic nonfiction, graphic books, poetry, and literary translations. For the last nineteen years, Navayana has led the charge in bringing radical literature on caste and politics to an English-speaking readership.

Gita Ramaswamy is best known for her work with Hyderabad Book Trust that has published over four hundred titles since 1980. HBT pioneered low-cost books and translations from across the world—from Alex Haley to Mahasweta Devi. She was earlier associated with the Marxist–Leninist movement in Telangana. Going underground during the Emergency in 1975 with her husband Cyril Reddy, she taught English in a dalit basti in Ghaziabad, near Delhi. Starting in 1984, she worked for a decade with the dalits of Ibrahimpatnam and helped them in their fight against bonded labour and landlessness. Gita has authored several books in English (including Jeena Hai To Marna Seekho: The Life and Times of George Reddy, 2016, and India Stinking: Manual Scavengers in Andhra Pradesh and Their Work, 2005.

Pradnya Daya Pawar is a leading Dalit–feminist Marathi poet, columnist, and writer. Her work interrogates caste oppression and patriarchal exploitation in Indian society. Her books on poetry include Antastha, Utkat Jivghenya Dhagiwar, Aarpaar Layit Pranantik and Drushyancha Dhobal Samudra. She received the Birsa Munda Sanman Puraskar in 2009 and the Bodhivardhan Puraskar in 2010, among many other awards, several of which were returned to the state in protest against the growing religious intolerance endorsed by the government.

Jerry Pinto is a poet, novelist, short story writer, translator, and journalist. His major works include Helen: The Life and Times of an H-Bomb, Em and the Big Hoom, and Murder in Mahim. He recently co-translated the abhangs of Marathi women saints in the book The Ant Who Swallowed the Sun Whole.