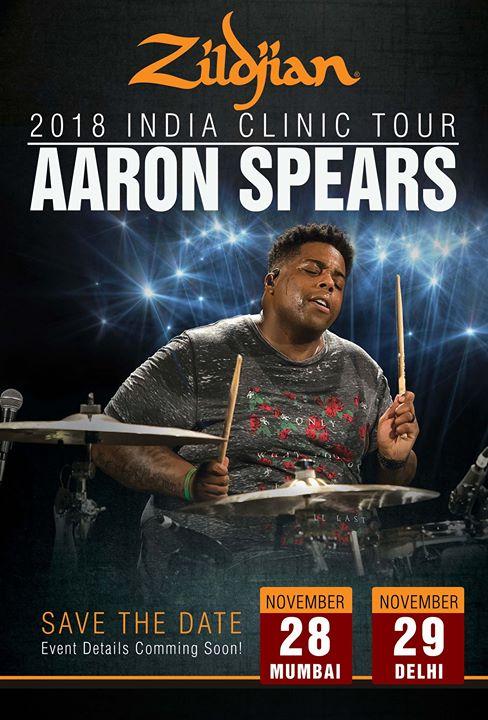 Get ready for the biggest Drum Clinic of the year hosted by Zildjian Company! We are happy to announce that we would be bringing down Aaron Spears (Usher, Ariana Grande) to India for two clinics.Please do come down for the Mumbai leg taking place at the G5a Foundation.

Aaron’s musical career and some highlights:
Since joining Usher, Aaron Spears has had the opportunity to play around the world and in some of the most popular televised shows in the U.S. like Saturday Night Live (SNL), and the 2005 Grammy Awards where he performed “Caught Up” with Usher and “Sex Machine” With “The Godfather of Soul” James Brown. Aaron Spears was also nominated for a Grammy award in 2004 as a music producer, for his work on the tracks “Superstar” and “Confessions” from Usher’s 2004 effort Confessions.

Aaron Spears has taken a stab at the world of drumming education as well. After his performance at the 2006 Modern Drummer Festival, Aaron Spears was invited to shoot a DVD of his own. The 2-DVD Aarons Spears – Beyond The Chops: Groove, Musicality and Technique wound up seeing the light of day in October of 2009.

Another aspect of Aaron Spears’s career that he’s really proud off is the list of drumming endorsements he has gathered over the years. Aaron Spears’s endorsements include Zildjian, Remo, DW, and Vic Firth – just to name a few. These are companies Aaron Spears really sought after. He has worked with Vic Firth to develop his own signature drumstick, and with Zildjian on the development of the “Inspiration Pack” – a cymbal pack designed expressly for Gospel & Praise and Worship music. The cymbal pack was created hand in hand with Aaron Spears and the Rhythm Alliance. This group of drummers that Aaron is a part off, includes Gorden Campbell, Teddy Campbell, Gerald Heyward, Marvin McQuitty, and Nisan Stewart.