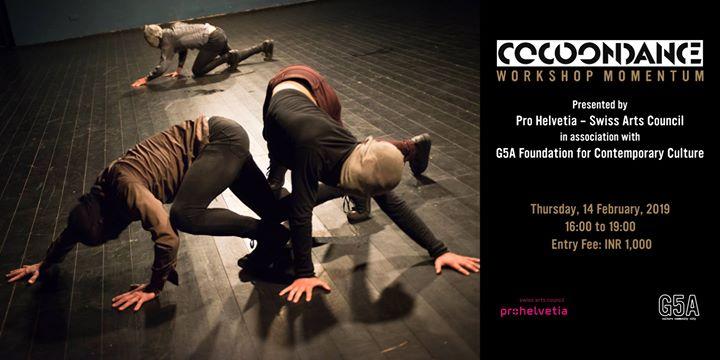 Presenting a workshop by the performers of ‘Momentum’ by CocoonDance, presented by Pro Helvetia New Delhi – Swiss Arts Council in Mumbai for the first time.

‘Momentum’ is a dance show that makes a connection between the dancers and the audience through the palpable feeling of movement in a shared space.

The Workshop:
The performers and dancers working with the company (led by Rafaële Giovanola, founder and choreographer), will share the tools they used to create this piece through a dedicated 3-hour workshop meant specifically for professional contemporary and classical dancers.

This workshop will involve movement and will focus on the ‘exhaustion of repetition’ with pulsations that are concentrated in the spine. It will involve engaging with the body and breath in specific ways, and observing and learning about the consequent transformations caused in the body afterwards.

In the workshop, the group will build on the idea of generating energy by working with pulsations. This energy then becomes the starting point to initiate a fresh choreographic composition.

Some training and a willingness to work with rigour, focusing on movement is the primary requirement for participation in this workshop.

CocoonDance was founded by choreographer Rafaële Giovanola and dramaturge Rainald Endraß in 2000. Swiss-born Giovanola was a soloist in Turin before being brought to the Frankfurt Ballett by William Forsythe for the duration of eight years. After this, she worked with Pavel Mikuláštik’s Choreographisches Theater, with Bonn as the last station. Since 2000, CocoonDance has been producing and performing in the independent Theater im Ballsaal in Bonn; since the season 2004/05 the company also is curating the dance program and is responsible for organization and financing of the theatre.

Rafaële Giovanola
Rafaële Giovanola (Choreography/ direction), Swiss, born in Baltimore, USA. She studied at Marika Besobrasova in Monte Carlo. Following her first engagement as a soloist in Turin. After one season in Turin, Rafaële Giovanola was engaged by Egon Madsen for the Frankfurt Ballet. There, she danced the classical repertoire and co-operated with several modern choreographers like Jiri Kylian, Uwe Scholz and William Forsythe ,the Frankfurt Ballet choreographer. Under his direction she stayed with the Frankfurt Ballet for eight years, being involved in all important productions. During her engagement in Frankfurt she met the guest-choreographers Daniel Larrieu, Stephen Petronio and Christoph Nel. Since 1990, when the Choreographic Theatre was founded, Rafaële Giovanola is a member of Pavel Mikuláštik’s company. In 1995 Rafaële Giovanola was mentioned in the annual poll of critics of ballet international/tanz aktuell“ in the category „exceptional dancing personalities“. Since March 2000 grounded together with Rainald Endraß the Freelance Group CocoonDance. Rafaële Giovanola has been teaching for different companies in the Oper Bonn at the Städtischen Bühnen Freiburg in Breisgau, the tanzhaus NRW in Düsseldorf, the Brotfabrik Bonn, the Theater in St. Gallen (CH), at the Staatstheater Nürnberg and for the Ewgenij Panfilow Company in Perm, Russia.