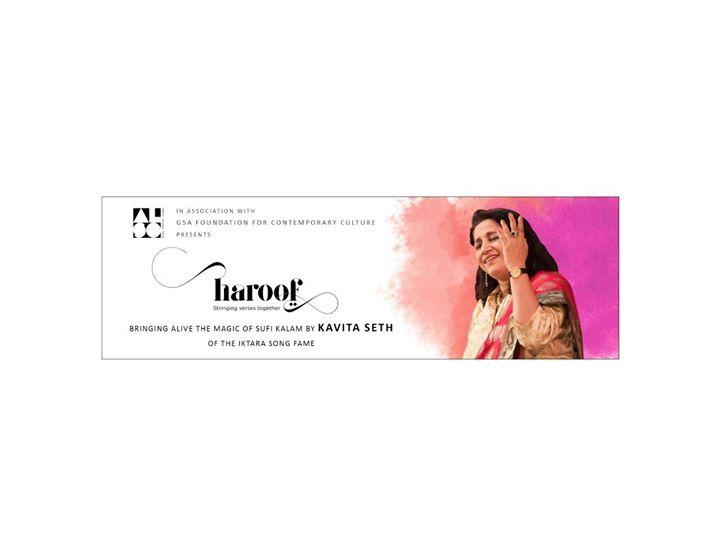 Haroof, a monthly series of curated evenings, a revival of the Baithak tradition, seeks to create a community of discerning music lovers that celebrate saaz-o-mausiqui. Haroof is to Urdu, as the Alphabet is to English, the letters of which are strung together to make a verse, which in turn, form a bandish or a ghazal.

The evenings originate from the motivation to make Hindustani classical music a universal, unforgettable experience and to create a blueprint for artists and audiences around the world to appreciate, promote and become one with the magnificence of music. A desire to celebrate tameez and tehzeeb that is reminiscent of the era of the high culture gone by.
The artists who will feature in this series will span genres across Sufi Kalam, ghazal, geet, Bengali and Punjabi folk music.

The fifth curated evening will feature Kavita Seth.
Mystic Sufi poets like Khusrau, Kabir and Syed Zia Alvi wrote soul stirring verses to speak about their quest for the divine. The soul of these words finds the power of Kavita Seth’s vocals when she brings alive some rare and popular writings of these mystics to life.

Sufi kalaam, for Kavita Seth, is not just about being able to render compositions in her voice but to invoke the same fervor and love for the divine. Popular poetry like ‘Chaap Tilak’ to ‘Sab jag maya’ are two examples of thought that will be given their due at Haroof on February 16, 2019, at The G5A Foundation for Contemporary Culture.

A renowned Sufi vocalist, Kavita Seth is best known for her rendition of popular Hindi Cinema songs like Iktara and Murabba from Wake Up Sid and Bombay Talkies respectively. A post graduate in Music, sangeet alankar from Gandharva Mahavidyalaya and an MA in Hindi Literature from the University of Delhi, she has traveled the world with her repertoire of Sufi kalaam, ghazals, and folk music.
�
Please note: Student passes are available against a valid Student ID card and for people under 25 years of age only. If the valid Student ID card is not presented, the donor pass will be held invalid.