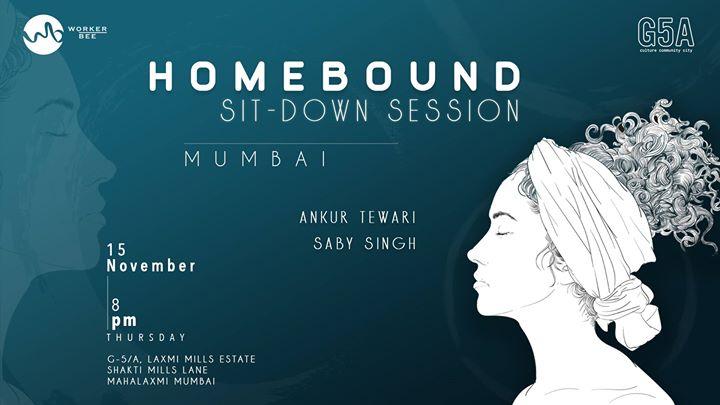 Is it always about looking at the greener side and wanting to experience it? Maybe it’s about being where we are, in the moment and treasuring it.

We are Homebound. By choice.

Through Homebound Sit-Down Sessions, we take the emotion to diverse places and bring people together in an intimate space.

Be a part and experience the emotion!

Ankur Tewari:
Ankur Tewari is a storyteller. Having spent the better part of his life discovering different mediums to share his tales, Ankur brings his simple and evocative songs and poems to life.

Ankur Tewari, who also moonlights as a singer-songwriter, is a well-known Bollywood lyricist and composer and is at the helm of the band’s sound. His lyrics form an emotional connection with the
audience, creating an overwhelming and immersive live set – a factor that has played a prominent role in launching them to the top of the college & festivals circuit in the country.

Apart from being one of the primary faces of Bollywood lyricist community, Ankur has released two studio albums, Jannat & a double album, “SIDE A/ SIDE B” independently. He recently released ʻBachcha Partyʼ album for kids along with Sony Music.

Saby Singh:
Saby Singh is a singer-songwriter from Kashmir. He derives his roots from Hindustan Shastriya Sangeet and blends it with his neo-blues, alt-rock and indie-pop influences. With major commitment to melodies, he writes in Urdu. Saby plays a dynamic set where he is known to deliver super improvised versions of his own songs.
His recently released single ‘ASMA’, an Urdu word for longing is being widely praised for its intimate vibe and poignancy.