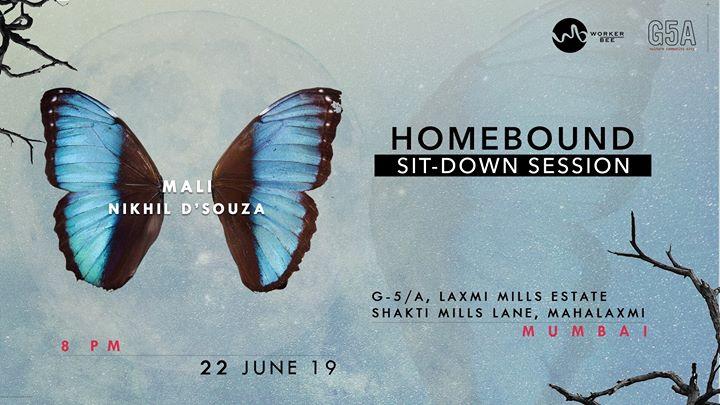 Sometimes you don’t.
It might not be about leaving your home and then coming back, it might just be about staying where you are.

Home is a word,
Your
people,
and uncountable emotions.

It’s the bicycle on the way, the sight of that familiar face.
It’s the cake that you bake, the smell of your room that you inhale, the drawer that collects things random, the songs of childhood you hum.

Homebound is that smell, that sight and everything that feels just right.

It’s the peace and the ease when you say,

After going places in Bangalore, Delhi and Chandigarh this is Homebound Sit-Down Session’s another edition in Mumbai.

Nikhil D’Souza and Mali (Maalavika Manoj) are two creative geniuses whose profound talents are a delight to witness LIVE.

Nikhil D’Souza is a singer, songwriter and guitarist from Mumbai.

Nikhil’s genre and musical style can be loosely defined as eclectic acoustic guitar-based pop. His songs have a full melodic quality to them due to his use of alternative tunings (favoured by such artists as Nick Drake and Jeff Buckley). Nikhil’s major musical influences are Sting and Jeff Buckley.He was the South Asia Soloist Winner at SUTASI ’09.

Mali AKA Maalavika Manoj is a Mumbai-based singer-songwriter whose tunes capture the authenticity of classic pop from the 1970s, ’80s and ’90s.

Her debut EP Rush, recorded live with some of the most talented musicians from the Indian independent scene such as fellow singer- songwriter and guitarist Tejas, drummer Jehangir Jehangir and bassist Stuart DaCosta, embraces the kind of warm, raw, analog sounds that are rarely heard in contemporary pop today.
Put simply, it’s pure, unadulterated music that’s fresh but without the frills. Think back to the Carpenters, Fleetwood Mac and Alanis Morissette, but with lyrics that detail the experiences of a twenty- something woman in urban India.

A storyteller as much as musician, Mali’s songs are inspired by people, both those closest to her and those she has encountered and have impacted her.

‘Dreaming’ is a song about going through school life with ADHD, ‘Changed Situations’ about making and losing a friend, and
‘Poor Girl’s Dream’ about being the new kid on the block in a big city like Mumbai.