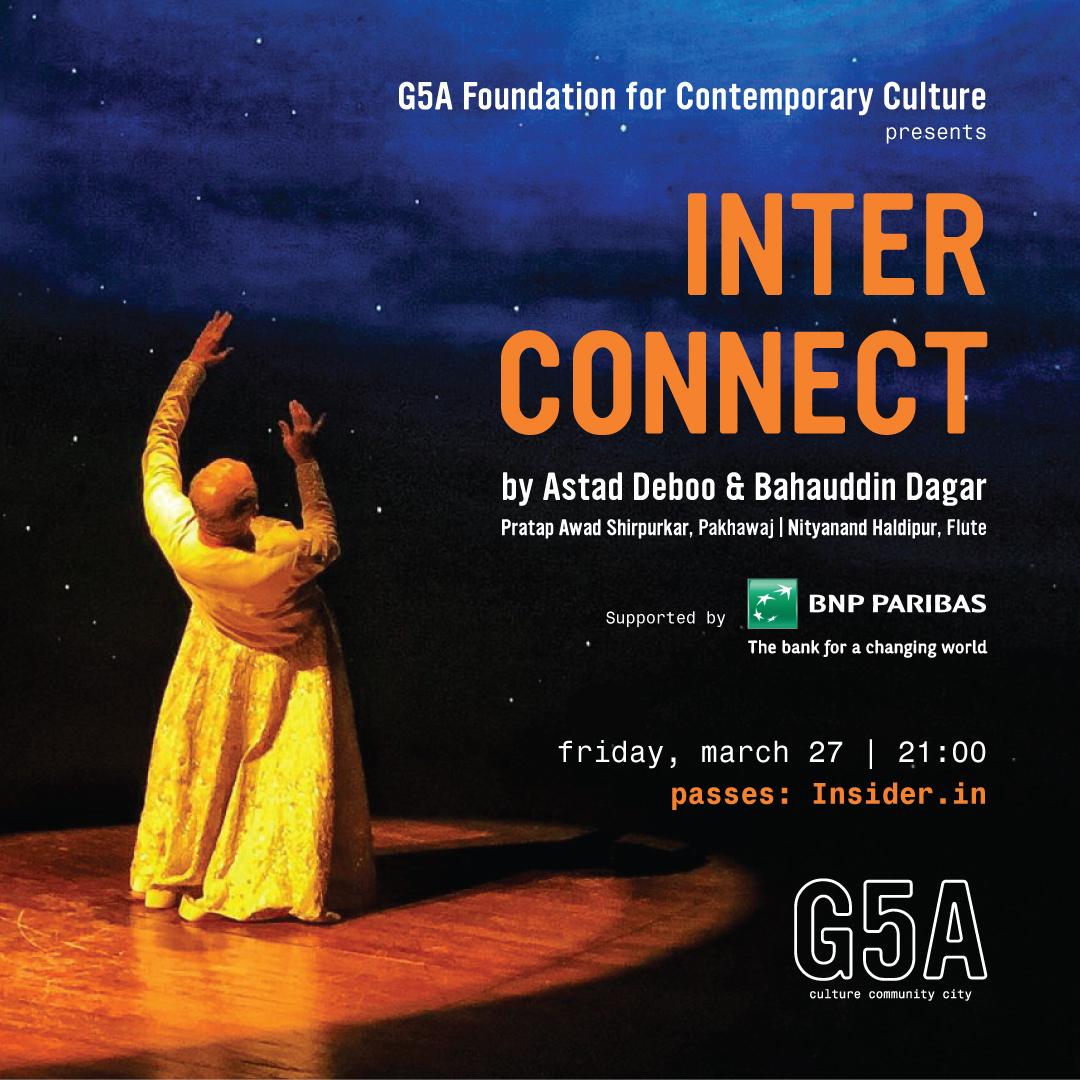 Passes will be available soon!

In Bahauddin Dagar’s words: “This performance is a culmination of the old and the new seeking to renew itself whilst maintaining its form. It cannot be looked at as a fusion but a confluence of ideas in the large melting pot. The theory of these ideas are nothing new but an Indian ness that accepts, dissolves and reinvents itself time and again like the concept of the trinities of Brahma, Vishnu and Mahesh where one recreates, sustains and destroys time and again to maintain newness. I, like many choreographers before me, have pondered the eternal question, ‘what came first,the movement or the music?’ While some choreographers are inspired by the music and yet others seek out the music to fit within the grammar of their art form, for me the process is entirely fluid with the dancer and musician seeking to find a seamless process to create an original work.”

Astad Deboo’s (1947–) name is synonymous with Contemporary Indian Dance, a style that he pioneered at a time when innovations in Indian dance were not welcomed. Astad Deboo has received two prestigious awards from the Government of India: in 1995, the Creative Dance Award from the Government’s major Arts organization, Sangeet Natak Akamedi, and in 2007, the Padma Shri recognizing him as a pioneer in Contemporary Indian Dance. Astad Deboo’s dynamic dance career of over 48years, with performances in over 72 countries, includes solo, group and collaborative choreography with performing artists nationally as well as Internationally. Astad describes his style as “contemporary in vocabulary and traditional in restraints.” His significant legacy offers innovative models for younger Indian artists whom he exhorts with characteristic clarity: “to be contemporary Indian dancers, we must be Indian contemporary”, not simply imitate the west. “Indian contemporary” idioms evolve from India’s rich expressive traditions along with openness to intercultural and cross-disciplinary interactions in today’s globalized world.

Born into the illustrious Dagar family of Dhrupad musicians in 1970, Mohi Baha’ud-din first began his foray into Indian Classical Music at the early age of seven, training on the Sitar under the expert tutelage of his mother, Smt. Pramila Dagar. Mohi Baha’ud-din is a unique artist who has played for diverse and varied audiences in India and across the world. A cross-platform performer, he has made regular appearances on television and radio networks. His music has been recorded by Music Today (India), Makars (France), Ragini Sutra (India), Sense World (London), and India Music Archives (USA). Mohi Baha’ud-din has also been invited to serve under Nana Shirgaokar Research Professorship at the University Of Goa for three years from 2013 to 2015. Mohi Baha’ud-din continues to receive able guidance from the esteemed Pandit Pushpraj Koshti, a senior disciple of Ustad Zia Mohiuddin Dagar and Ustad Zia Fariduddin Dagar.

Pratap Awad Shirpurkar has received  his training in the  Pakhawaj from Pandit Subhash Maharaj Deshmukh, Pandit Uddhav Aapegaonkar , Pandit Vasantrao Ghorpadkar and Pt Arvind kumar Azad. Currently he is taking training  from Talyogi Pt. Suresh Talwalkar. Pratap has given many solo performances and  is a vibrant accompanist for many Dhrupad musicians and instrumentalists both in India and abroad. He  has performed in many  prestigious festivals in India USA, Canada, UK,Europe, Japan, Singapore, Israel, Bangladesh. He has received various scholarships and awards such Government of Maharashtra  Scholarship 2004, Talmani Puraskar 2008, and most recently, Kala Govrav Sanmaan 2020.

The talented Nityanand Haldipur – ranked among the country’s leading flautists and a senior disciple of the reclusive genius, Padma Bhushan Smt. Annapurna Devi – represents the pure essence of a highly revered musical heritage. Born in Bombay in a deeply spiritual family, Nityanand was fortunate to have the right environment for his latent musical talents to blossom. Nityanand’s training continued under the late Pandit Chidanand Nagarkar, and Pandit Devendra Murdeshwar, seniormost disciple of late Pandit Pannalal Ghosh, under whom Nityanand perfected his technique. However, it was after 1986, when Padmabhushan Smt. Annapurna Devi – doyenne of the Senia-Maihar gharana – accepted him as one of her disciples that Nityanand’s talent and musicianship truly flowered. It progressively acquired depth, maturity and a new dimension. His performances are replete with unexpected, sweet and breath-taking improvisations. An eclectic musician, Nityanand has kept his mind and ears open to the beat that other styles and cultures have to offer. His rich and extensive repertoire covers a wide canvas: from the pure classical to the experimental fusion.