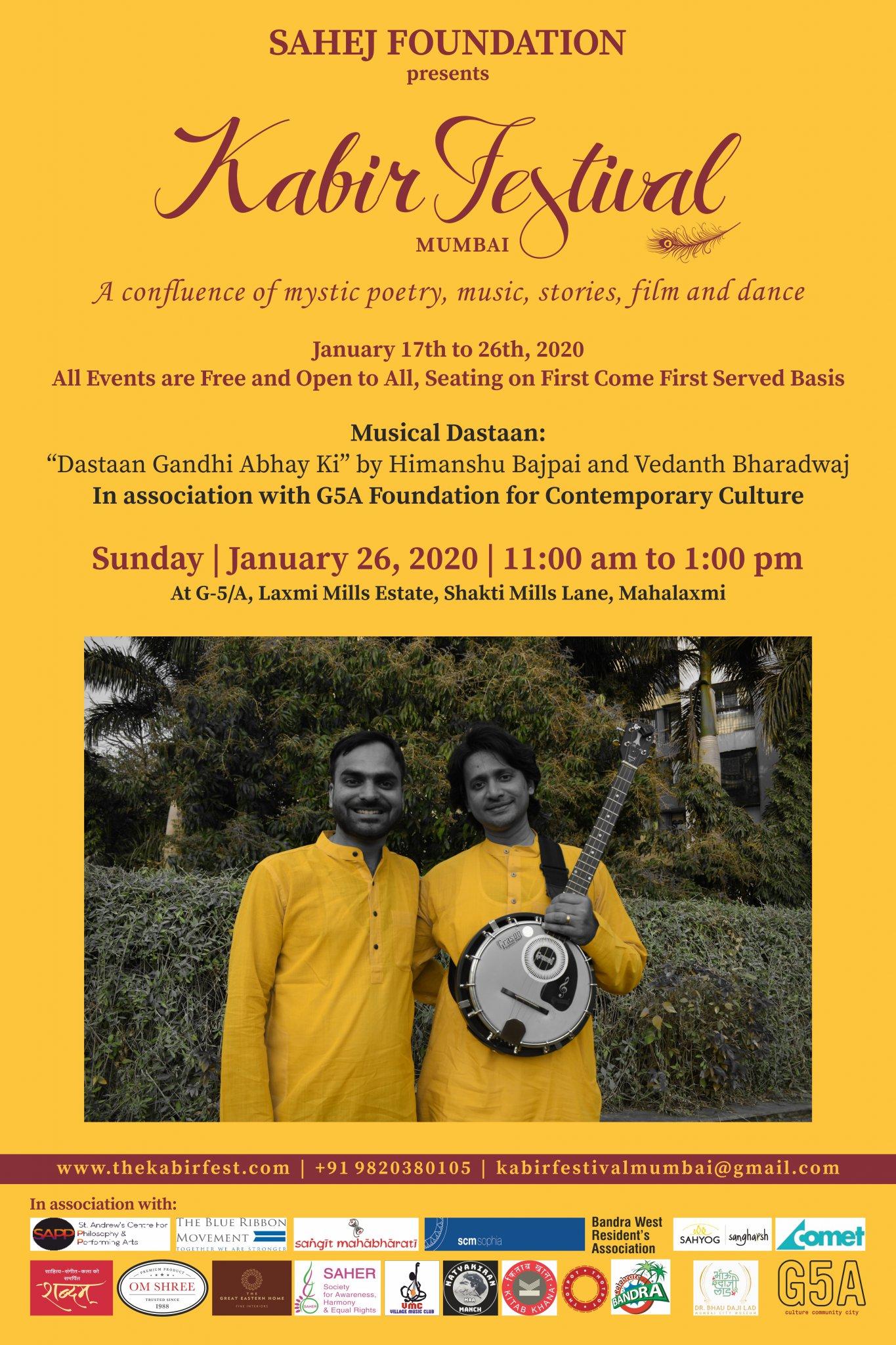 G5A hosts the Kabir Festival at the Black Box with a special musical storytelling (dastangoi) performance.

Synopsis: As a child, Gandhi Ji was scared of thieves, ghosts, darkness among other petty things. This story takes us through the life of Mahatma Gandhi and how he overcame his fear, led the freedom struggle and finally won India’s freedom. The practice of Ahimsa by Gandhi was not for the weak hearted, in fact, only people with boundless courage can practice it.

This daastaan is woven together and narrated by Himanshu Bajpai. Gandhi believed that music was one thing that can bind people together. In his Ashram Bhajanawali there are songs of different religion, caste, creed, region, languages, all put together. Few songs in this dastan are taken from the Ashram Bhajanawali. The songs are sung by Vedanth Bharadwaj.

Himanshu Bajpai is a storyteller, author and journalist. He writes about the society and culture of the city of Lucknow. He is a well-known artist of dastangoi—the medieval form of oral storytelling in Urdu. He famously brings alive Lucknow through tales of its people, its history, its syncretic culture, traditions, festivals and even the famed mangoes in Daastan-e-Aam. Himanshu performs much acclaimed dastan on Majaz Lakhnawi, Abdul Rahim Khanekhana, Amir Khusrau, Chandrakanta and Sagar Khayyami among others. Himanshu believes that stories keep alive the character of a city and he passionately tells these tales in his unique storytelling style. He is a walking treasure of Urdu and Hindi poetry. He has done a PhD and his doctoral thesis was on the Naval Kishore Press of Lucknow which was India’s largest printing press of the 19th and 20th century, which printed the biggest classics of Hindi and Urdu literature. Himanshu’s first book Qissa Qissa Lucknowwa, published by Rajkamal Prakashan, is about the stories of common people and everyday life of the old city of Lucknow. It became an instant best-seller.

Vedanth Bharadwaj is a multifaceted musician who dabbles in several genres of music. He specialises in singing songs written by mystic saint poets from the Bhakti and Sufi traditions. He has sung at several music festivals at prestigious venues in India and abroad. He has formally learnt carnatic, hindustani and Western classical music and is currently under the tutelage of Sri Ramamoorthy Rao. He has composed music for dance and theatre productions, feature films, advertisements, documentaries and albums. He is the director of the Chennai Children’s Choir, a choir of children from economically challenged backgrounds. They represented India at the Serenade Chorale Festival and sang at the prestigious Kennedy Centre in Washington DC.