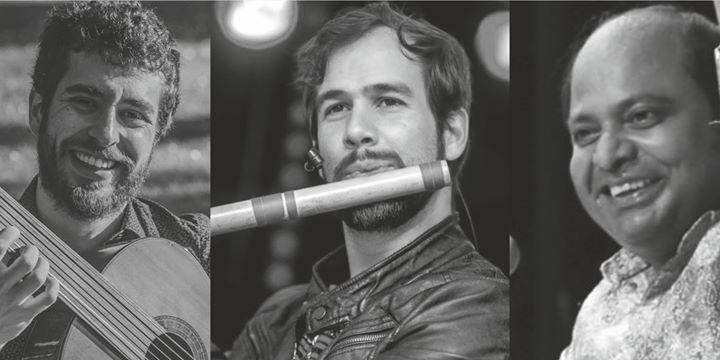 Passes available on BookMyShow at https://in.bookmyshow.com/events/magma-project-brazilian-music-concert/ET00090646

Magma is the core of our planet, the Sun inside the Earth, the place where things meet and melt. It’s the inner vital energy that is in constant motion and expansion, eventually overflowing to the surface and, by doing so, creating new territories to be discovered.

Born in Piracicaba, São Paulo, Ivan Vendemiatti is a flutist, composer and dancer. He began his studies with the transverse bamboo flute in 2008 when he first met the Pifano (Brazilian Fife), and in 2010 he played for the first time a Bansuri in India, only starting his classical Indian music training in 2013 with Pt. Rupak Kulkarni. He has been playing, composing, teaching, constructing and integrating this instrument into different music projects and multidisciplinar contexts(dance performances and festivals, visual arts, documentaries, poets gathering).

He played with the main musicians of Pifano in Brazil, among them, Zé do Pife, Zabé da Loca, Chau do Pife, João do Pife, Carlos Malta, Egildo Vieira, travelling and researching in the states of Pernambuco, Sergipe, Alagoas, Bahia.
He was one of the founders and composer of the first Banda de Pífanos in south Brazil, group called “Pife na Manga”, touring more then 28 cities in Brazil, and France.

Guitar player from Brazil, Juliano is constantly seeking repertoires and projects that reveal unexpected connections. After studying classical guitar and conducting a Master in Music at University of São Paulo, Juliano has worked as soundtrack composer and producer for dance (Morena Nascimento), movie (Fernando Meirelles), theater (Martha Kiss) and recorded 7 albums in Brazil with projects such as Grand Bazaar, Luiza Lian, Orkestra Bandida, Yaqin Ensemble and Fortuna. Based in the Netherland since 2017, Juliano finished his Master with distinction at Codarts – Rotterdam, studying the fretless guitar and Easter Mediterranean Music with Kudsi Erguner and Michalis Cholevas. His current projects include Magma Project, Mucirque and Amazonon.

Born in a musical family in Raniganj near Kolkata, Anutosh was fortunate to receive intense musical training from his father Shri Tarapada Degharia of Farukkabad Gharana from a very young age of four.

Anutosh could establish himself as a versatile tabla player in a very short time due to his dexterity both as a tabla soloist and accompanist. He is in constant demand by various music organizers all over India and abroad. No wonder that he has accompanied several reputed artists in several cities of India, as well as in countries like Italy, France, Spain etc.

He also regularly appears on several T.V.channels like D.D.National, Zee TV, Asia music, and so on.