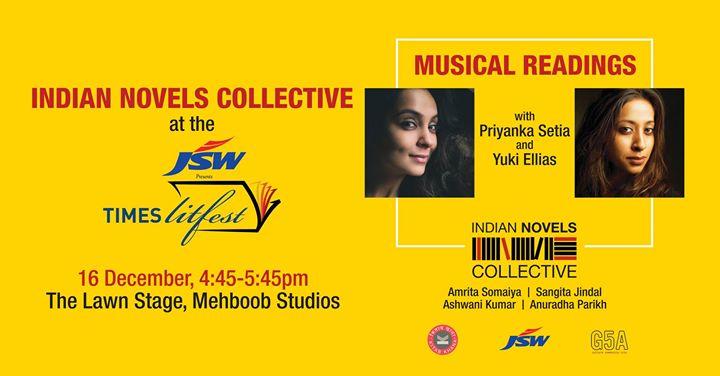 On Sunday, December 16, 2018, Indian Novels Collective will be at the Times Lit Fest for a musical evening with Priyanka Setia and Yuki Ellias.

Priyanka Setia will read from Pachpan Khambe Laal Deewarein by Usha Priyamvada accompanied by Sanchit Chaudhary on the violin and Yuki Ellias will bring alive Manik Bandyopadhyay’s Padma Nadir Majhi to the notes of the flute by Easwaran Anantram (Vivek).

Set in a fictitious village in present-day Bangladesh in pre-independent India. Padma Nadir Majhi is a story of a fisherman who finds himself exploited by a small businessman. Meanwhile, Pachpan Khambhe Laal Deewarein, set in urban India is about how the eldest daughter of a middle-class family, who is also the sole bread winner sacrifices her love for her family’s sake.

The Indian Novels Collective was established with the hope of bridging the gap between the older and younger generation by introducing them to regional literature, they have little access to, due to insufficient translations of classical regional literature. Both Pachpan Khambe Laal Deewarein and Padma Nadir Majhi will soon be translated to English with the aim of restoring them to their original glory and introducing them to both Indians from different regions and readers across the globe.

Save the date and do spread the word!