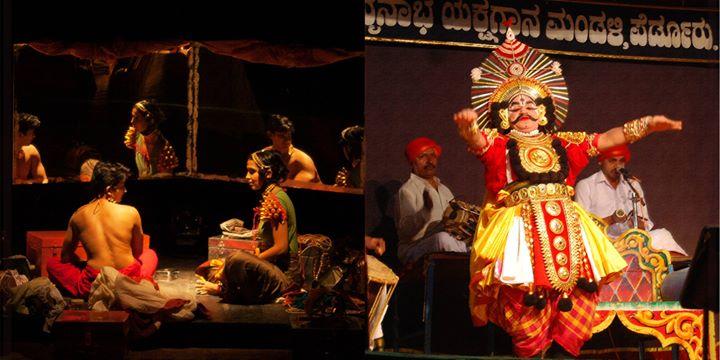 Sharanya will present on Akshayambara, a theatrical production that explores the position of women, role of women characters and streevesha (female impersonation) within the male-dominated practice of Yakshagana. Drawing from research and personal experience, the performance imagines a reversal of roles in the popular Yakshagana plot of ‘Draupadi Vastrapaharana’. The play seeks to explore the conflicts around tradition, gender, power, and morality inherent in the form of Yakshagana.

Kruti will present on her research, examining the differences between the performances of prasangas in Yakshagana that are presented in shorter durations and those that continue through the night. The project studied how this variation in time affects pedagogy, the training of Bhagavatas and actors, and the conceptual and aesthetic concerns of the form as it is performed and viewed.

Sharanya Ramprakash is a stage actor, director and one of the founders of Dramanon, Bangalore. She has directed six full-length productions that have had more than 75 shows in various venues across the country. She received the INLAKS Theatre Award 2014 through which she trained at the ‘Udupi Yakshagana Kendra’ under the tutelage of Guru Sanjeeva Suvarna.

Kruti R is a farmer in Shivamogga district in Karnataka. She is a bhagavata (Singer of Yakshagana songs) and leads an all-female Taalmaddale troupe. Kruti is an editor of the Kannada journal, Loka, which covers social and political issues, and has also edited Beyond Bangalore, a collection of stories translated from the Kannada. She has an MA in Anthropology from Mysore University and an MPhil in Sociology from the Delhi School of Economics.

Sharanya Ramprakash received a grant from India Foundation for the Arts, under the Arts Practice programme, with part support from Voltas Limited.

Kruti R received a grant from India Foundation for the Arts, under the Arts Research programme.

We look forward to seeing you there!