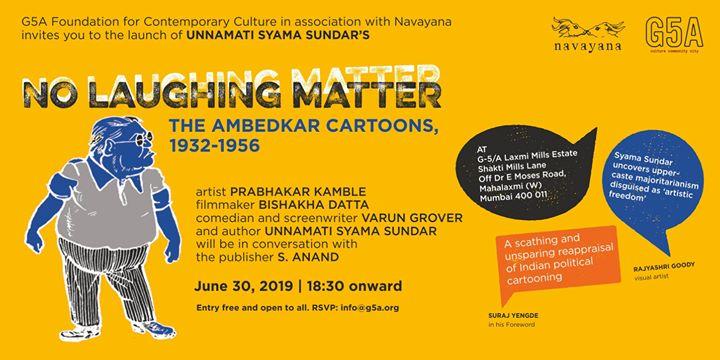 About the book:
This history like no other asks you to consider what you are laughing at…

In 2012, the inclusion of a 1949 cartoon by Shankar showing Jawaharlal Nehru whipping a snail-borne B.R. Ambedkar in a school textbook, evoked Dalit protest, and a Savarna counter on the grounds of artistic freedom. Scholar and cartoonist Unnamati Syama Sundar then undertook an archival survey of cartoons on Ambedkar in the English language press. The result, a collection of over a hundred cartoons from India’s leading publications, drawn by Shankar, Enver Ahmed and R.K. Laxman, among others, lays bare the perverse and thoughtless
hostility Ambedkar often contended with. The incisional
commentary woven around each cartoon offers a veritable biography of a man historically wronged.

About the author:
Unnamati Syama Sundar grew up in Vijayawada on a diet of Calvin and Hobbes, Dennis the Menace, Chacha Chaudhary and Amar Chitra Katha. He is doing his doctoral research at
Jawaharlal Nehru University on the art featured in Chandamama, the popular Telugu children’s magazine founded in 1947. Syama Sundar is well-known for his Ambedkarite cartoons in the non-Savarna social media world. His work is featured regularly on the website roundtableindia.co.in.
.
.
.
.
The book launch will be followed by author, Bishakha Dutta, Prabhakar Kamble and Varun Grover in conversation with S. Anand – publisher, Navayana

Entry free and open to all
RSVP: info@g5a.org