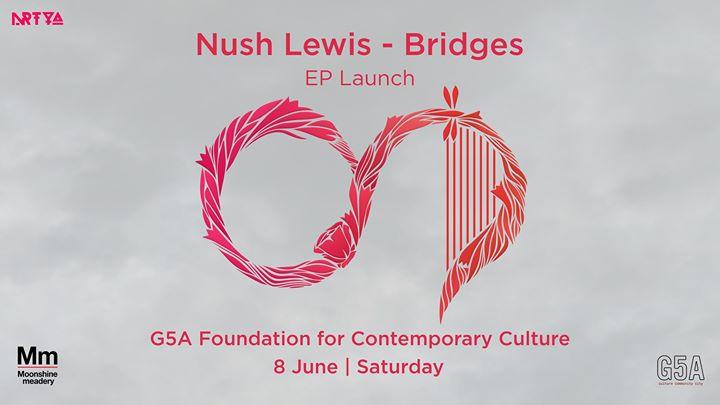 nrtya presents the launch of the Bridges EP by Nush Lewis

“Bridges” is composed, arranged and produced by Nush Lewis and is a body work that represents an artist’s personal growth moving against all odds and self discovery. It has been about two years in the making in terms of writing and rewriting. Sonically, it was driven by the piano as opposed to the last EP. The storytelling in the songs opened up a more harmonic spectrum because of it. The usage of live drums and bass has also played a big role in the making of the EP.

The 5 songs express a range of emotions – ‘Travel’ tells a story of unachievable love, ‘Lament’ is a grandmother’s journey through life, ‘Untuned’ is leaping into freedom and embracing it, ‘Threads’ is about the lies we surround ourselves with & ‘Distance’ is about an alternate universe we would like to escape to. 2 of the 5 tracks are collaborations with producers. ‘Threads’ is a collaboration with Italian producer, Luca Petracca. And ‘Distance’ is a collaboration with ambient artist, Riatsu.

About Nush Lewis –
Nush is a versatile harpist, keyboardist, composer and singer-songwriter based in Mumbai, India. Having trained in the piano in her childhood and since then extensively in the harp, she has completed her performance course in the harp from one the finest institutes in the country, the KM Music Conservatory, Chennai.
With moody, pensive compositions, combined with a unique production ethos, her musicality can best be described as minimal acoustic, with intricate melodic lines set upon ephemeral soundscape
An avid advocate for music and the arts, in 2017, Nush started her own arts education company, OffSet, an initiative directly support arts education and creative development with support from their respective industries. She has also been a faculty member at Furtados School of Music – FSM and was part of the Curriculum Development and Outreach department at the The True School of Music.

About the Band –
The band comprises of Linford D’souza (from Smalltalk/Monica Sharma Dogra) on drums, Yohann Coutinho (from Unohu/ Smalltalk/Kingro) on bass, the exceptional Adiel Massar on cello along with an all female choir featuring Deepika Seth, Saachi Rajadhyaksha, Gouri Ranjit, Damini Gautam, Ananya Sharma, Ilina Hats, Brecilla Dsouza, Tanya Shah, Kavya Nair, Medha Sahi, Aarifah Eve Rebello, Daphimanroi Warjri & Debbie Vincent. With Riatsu as a guest performer and of course, Nush Lewis on harp, keys and vocal duties. The band makes sure the sound lends itself to the stories being told in the song.

Nush has also collaborated with artist, Vaishnavi Kumar for the EP’s artwork. Vaishnavi is a graduate in design from Boston University and currently working in Boston. She has created individual, intuitive and intricate paper-cut art representing each song in Bridges.