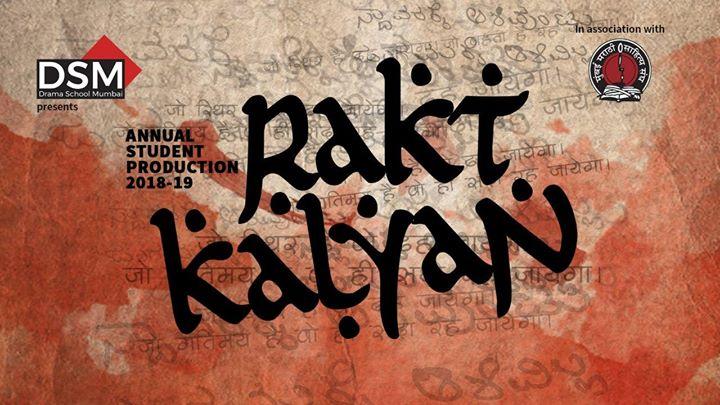 Synopsis:
Written in 1989 in the backdrop of mandir­mandal conflict, this play draws parallels in the socio­religious, political and economic conditions between southern India in the 12th century A.D during Bhakti Movement and the current times as we see them today. Eight hundred years ago in the city of Kalyan a man called Basavanna assembled a congregation of poets, mystics, social revolutionaries and philosophers ­ unmatched in their creativity and social commitment. They opposed idolatry, rejected temple worship, upheld equality of sexes, and condemned the caste system. Events take a violent turn when they act on their beliefs and an upper caste Brahmin girl is married to a non­Brahmin boy. Rakt Kalyan (Tale­Danda) is a story spanning a few weeks that shows how a vibrant, prosperous society is plunged into anarchy and terror.

Director Profile: Sunil Shanbag
Sunil Shanbag is a Mumbai based theatre director and producer. He is the co­founder and artistic director of Theatre Arpana, and Tamaasha Theatre. Over the past 35 years, Sunil’s work across various genres of theatre practice has focussed on the complex nature of contemporary India, on stage as well as in various alternative spaces. His work spans across themes and issues that concern modern Indian society, across class, caste, gender and other inequalities. Major productions include Cotton 56, Polyester 84, S*x, M*rality, and Cens*rship, Stories in a Song, Loretta, and most recently, a re­imagining of the 1945 iconic play by Prithviraj Kapoor, Deewar. His work is seen at major theatre festivals across the country, and has also been presented over two seasons at the Shakespeare Globe Theatre in London. He has been associated with Theatre Freiburg in Germany. Sunil Shanbag has recently been awarded the Sangeet Natak Akademi award for theatre direction, 2017.

Writer Profile: Girish Karnad
Girish Raghunath Karnad (Born 19 May 1938) is an Indian actor, film director, Kannada writer, playwright and a Rhodes Scholar, who predominantly works in South Indian cinema and Bollywood. His rise as a playwright in the 1960s, marked the coming of age of modern Indian playwriting in Kannada, just as Badal Sarkar did in Bengali, Vijay Tendulkar in Marathi, and Mohan Rakesh in Hindi. He is a recipient of the 1998 Jnanpith Award, the highest literary honour conferred in India.
For four decades Karnad has composed plays, often using history and mythology to tackle contemporary issues. He has translated his plays into English and has received acclaim. His plays have been translated into some Indian languages and directed by directors like Ebrahim Alkazi, B. V. Karanth, Alyque Padamsee, Prasanna, Arvind Gaur, Satyadev Dubey, Vijaya Mehta, Shyamanand Jalan, Amal Allana and Zafer Mohiuddin. He is active in the world of Indian cinema working as an actor, director and screenwriter, in Hindi and Kannada cinema, and has earned awards. He was conferred Padma Shri and Padma Bhushan by the Government of India and won four Filmfare Awards, of which three are Filmfare Award for Best Director – Kannada and the fourth a Filmfare Best Screenplay Award.

For entry: RSVP at info@thedramaschoolmumbai.in