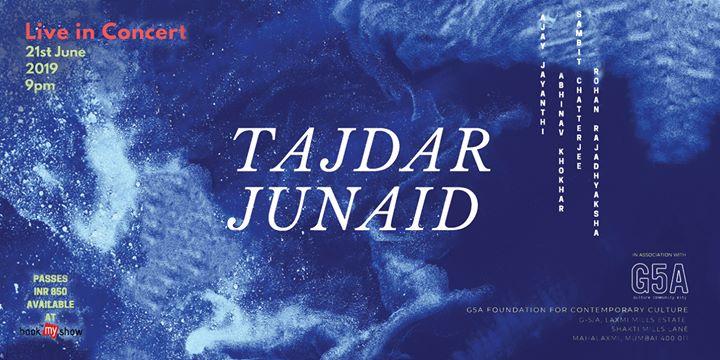 Tajdar Junaid and G5A Foundation for Contemporary Culture present an evening of Cinematic Music on the occasion of World Music Day, along with musicians Ajay Jayanthi, Abhinav Khokhar, Sambit Chatterjee, and Rohan Rajadhyaksha.

Tajdar Junaid
Tajdar Junaid is a multi instrumentalist, songwriter, composer, producer whose debut album ”What Colour Is Your Raindrop” was named album of the year by Rolling Stone magazine. His music has been featured in Academy Award winner Emma Thomson’s film ”Sold” and acclaimed Iranian filmmaker Mohsen Makhmalbaf’s film ”The President”. Closer home he has worked with Gulzar saheb, Aparna Sen, Rituparno Ghosh and was the music composer for the recently released film ”MuktiBhawan” which received a special mention at the 2017 National Awards.

Ajay Jayanthi
Born in a family of Carnatic classical musicians, Ajay was exposed to the world of classical music at an early age. However, having experimented with various other genres and instruments, it wasn’t until he turned 17 that he decided to get back to his roots and pick up the violin. After fundamental training from his uncle and former guru M. Srikanth, he received advanced training under the tutelage of his aunt who happens to be one of India’s foremost Carnatic classical violinists- Padma Shri Kalaimamani A Kanyakumari. Actively playing since 2012, apart from working on film projects and ad jingles, Ajay has had successful live concerts in various cities across the country like Mumbai, Pune, Delhi, Hyderabad, Chennai, Bengaluru, Ahmedabad, Kolkata, Kharagpur, Gwalior, etc.

Abhinav Khokhar
Abhinav Khokhar is one of the finest bass players that the city of New Delhi has to offer. He has been collaborating and writing with musicians from various genres of music for almost five years now and is fluent with various forms of music. He has collaborated with many international artists like Avishai Cohen (New York), Zakir Hussain (India), Matteo Fraboni (Italy), Raphaelle Brochet (Belgium), Carolina Calavanche (Columbia), Farah Siraj (Music ambassadress of Jordan) to name a few. One of the select few upright bass players in India, Abhinav has performed at the top jazz venues of the country like Windmills Craftworks (Bengaluru), Shisha Cafe (Pune), etc.

Sambit Chatterjee
Sambit Chatterjee has been playing drums for almost a decade and having taken tabla classes from his father Pt. Subhen Chatterjee, Sambit has now branched out, trying to find his sound. He considers Ranjit Barot to be one of his mentors now. He is playing with some of the leading indie bands in the circuit like What Escapes Me, The Ganesh Talkies, aswekeepsearching, Karma – Bandish Fusion, Mohini Dey and Rhythm Shaw, Noiseware and has also played with eminent classical musicians like Grammy winning Pt. Vishwa Mohan Bhatt / Pt. Kumar Bose / Ust. Taufiq Qureshi to name a few.

Rohan Rajadhyaksha
Rohan Rajadhyaksha is a 24 old composer, songwriter and keyboard player from Mumbai. Part of the alternative rock band ”Spud in the box”, Rohan has also performed with leading Indian independent artists such as Dhruv’s Voyage, Blackstratblues, Ox7gen Live and Tajdar Junaid.