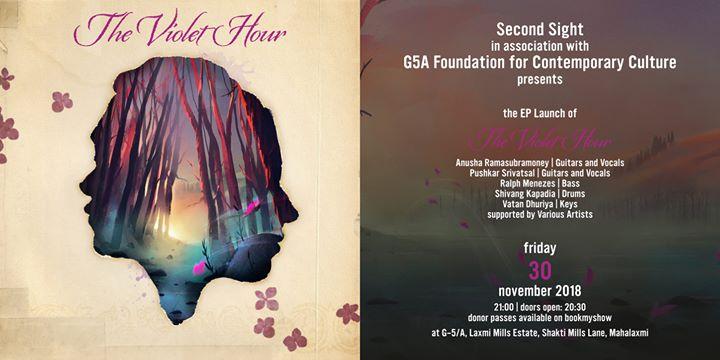 Passes available on BookMyShow at https://in.bookmyshow.com/events/second-sights-the-violet-hour-ep-launch/ET00088433

Second Sight was formed in late 2015, when Anusha and Pushkar met at Swarnabhoomi Academy of Music (SAM), and instantly connected personally and musically in their spontaneous jam sessions. It’s an interesting amalgamation – Anusha with her background in soul, a cappella and hip hop music; and Pushkar deriving his inspiration from music ranging from blues to indie folk and electronica. Seen exchanging guitars, and synths when on stage, and weaving their voices with rich harmonies, Second Sight delivers a moving performance every time. Second Sight perform as two outfits: they perform as a duo, and as a band with pianist Vatan Dhuriya, bassist Ralph Menezes and drummer Shivang Kapadia as well, playing original material and reimagined versions of some of their favourite songs. The sound of the band is very different from the duo and diverse, owing to the different musical background of all the members, and ranges from soul/R&B to hip hop to Latin music as well while still being unique to the band. Second Sight has been touted as one of “the 10 indie artists to watch out for in 2018”, in an article published on Redbull.com.

Anusha Ramasubramoney is a Mumbai based vocalist and guitarist, with an incredible range and musicality. She has been training in western contemporary, and has had a few years of western classical and Hindustani classical music training as well.

She is largely influenced by soul, jazz, RnB and blues and is now delving into more eclectic genres like fusion and electronica, including Latin American music, as she is experimenting with the different sounds of various languages. An alumni of Swarnabhoomi Academy of Music, she was under the tutelage of prolific singer Mili Vizcaino from Spain. Anusha has already performed at most major performance venues (such as The Pianoman in Delhi, Blue Frog, NCPA, Veranda in Mumbai, BFlat in Bangalore, Museum Theatre in Chennai) and local festivals with some of the best of the local musical talent like Shalmali Kholgade, Shibani Kashyap and others. She has appeared as part of music performances for VH1, Mtunes and T-Series Mixtape. As a performer of a cappella music, she led her University choir – Xavier’s College Chorus, and has been a part of semi-professional choir Living Voices. In college, she also discovered a love for acting as she was the lead in the musical, Kiss Me Kate and has appeared and performed for a few ads thence. She is a versatile artist and continues to experiment with complex harmonies and a cappella arrangements of popular music, as well as originals, now concentrating on songwriting and composing with her band, Second Sight.

Pushkar Srivatsal is a singer, songwriter and guitarist, currently based out of Mumbai. He is an alumni of Swarnabhoomi Academy of Music (SAM), learning under the guidance of Global music educators such as Mili Vizcaino, Sid Jacobs, Pablo Lapidusas, Pedro Silva and Johann Berby. At SAM was where he and Anusha Ramasubramoney founded Second Sight, and have been writing music together ever since. Pushkar cites musicians such as Hiatus Kaiyote, Jordan Rakei, Matt Corby, Radiohead, Jeff Buckley, Robert Glasper among others , as influences, while he also loves listening to music from all parts of the world in an endeavour to expand his own musicality and songwriting.

Vatan Dhuriya started playing piano quite early and from his early teens, he has been accompanying singers, and gaining stage experience through that. He moved to Mumbai about 2 years back, to further pursue a career in music, and today he is a highly sought after pianist in the Bollywood and independent music scene. He is associated with band such as Second Sight and Simetri, and also with Bollywood singers such as Monali Thakur, Raghav Sachar, to name a few. He wants to keep playing, learning and exploring more sounds, and is studying Western Classical piano from Trinity as well.

Shivang Kapadia is a session drummer originally from Ahmedabad. After teaching and performing collectively for around 2 years, he shifted his base to Bombay and has been performing around and out of the country since the last 2 years. He’s been a part of a pop, singer/songwriter outfit by the name of Random Gyan, and they released an EP called Just Some in 2018. He’s currently associated with bands like Second Sight, Namit Das + Anurag Shanker, Kwar-tete, Random Gyan, TimeWise and Hotpocket. Playing different kinds of music with a number of different musicians has enabled him to hone his skills furthermore. His influences involve Nate Smith, Brian Blade, Benny Greb, Bernard Purdie, Dennis Chambers, Gavin Harrison, Porcupine Tree, Jose James, Jordan Rakei and Hiatus Kaiyote to name a few.

Ralph Menezes is a session bass player from Vasai, Mumbai with few years of experience as a working professional musician and playing the bass, he has been exploring various forms of music currently. Ralph is a SAM (swanabhoomi academy of music) Alumini from chennai. Currently associated with bands like Second Sight, Namit Das + Anurag Shanker, The Tekina Collab and The Kwar-tete.

Being a part of ensembles with Sid Jacobs, Pablo Lapidusas, Mili Vizciano, Marcos Nimrichter, to name a few has only developed his skills as a musician.