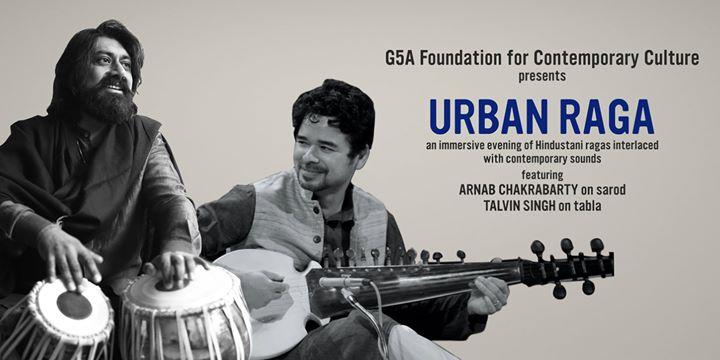 Featuring Arnab Chakrabarty and Talvin Singh performing in India for the first time together, Urban Raga brings a fresh sound to the timelessness of Hindustani instrumental music.

*Donor passes available on BookMyShow for INR 1000/- inclusive of GST. The pass includes one complimentary beer from Bombay Duck Brewing.*

Both musicians share a deep commitment to enhancing the technology of Indian musical instruments and the way they are heard in amplified settings. While Chakrabarty is a creative classicist steeped in the traditional idiom of the sarod, the world renowned tabla player and composer Talvin Singh brings to the mix a wide palette of flavours and influences, which allow them to present the music in an engaging and accessible format.

The two stellar musicians have teamed up for a series of intimate and rare baithaks around the country, the first edition of which is at G5A.

Arnab Chakrabarty is an outstanding exponent of Hindustani classical music and a practitioner on the sarod for nearly thirty years. One of the world’s leading sarod players today, Arnab is a relentlessly self-improving student of music, a teacher of extraordinary ability, and a successful designer of musical instruments. Arnab’s performances are noteworthy for a profound understanding of raga forms, deep erudition of both the sarode tradition and of Hindustani music in general, an exquisite, distinctive sound and virtuosity subordinated to the demands of the music.

Trained by the late Dr. Kalyan Mukherjea (1943-2010), a disciple of Pandit Radhika Mohan Maitra, the legendary custodian of the Shahjahanpur tradition of sarode music, Arnab is described by his teacher as “the best representative today, of the musical values I had inherited from Pandit Maitra”. In addition to his training under Dr. Mukherjea, Arnab has received several dozen traditional sarode compositions from Khalifa Ustad Irfan Muhammad Khan (b. 1954), of the Lucknow-Shahjahanpur gharana. Arnab received his initial training from maestros Brij Narayan and Pandit Buddhadev Dasgupta (1933-2018), and has supplemented his musical education with vocal training from Pandit Yeshwantbua Joshi (1926-2012), and sitar music from Vinayak Chittar, an inimitable sitar maestro.

Talvin Singh is a celebrated Percussionist, Composer, and Producer. He is today the most versatile Tabla player who has given the instrument a contemporary style by amalgamating diverse aspects of the repertoire of Tabla. He has studied and is equally apt in accompanying Ghazal, Folk and Indian Classical Music as well as Contemporary and Modern Music. He has been under the pupillage since the age of 15 with Acharya Lachman Singh Seen learning the Punjab Style of playing and aesthetics.

Singh’s Tablatronica sessions brought inspiration to a whole new generation of percussionists through his unconventional approach including contemporary Tabla projects such as Tabla Beat Science. Talvin has always pushed the boundaries of Indian Music and yet has been focused and dedicated to the practice and art of Tabla.

The albums “Together” with Niladri Kumar and “Vira” with Rakesh Chaurasia, have been pivotal in setting the benchmark for Contemporary Indian Music. Singh’s debut album “Ok” won the 1999 Mercury Prize. Singh has been awarded the South Bank Music prize and was awarded an OBE in 2015 for Services to Music.

Singh today composes for films and produces records from his studio facility in Suffolk and continues to perform internationally.