As a person, I’m very soft spoken, I don’t like attention, don’t like people looking at me on the street. I’m very low key. I literally walk with my head down, I don’t like to be loud. But when I am on stage, it’s different. It’s like I’m on top of the f***ing world! I feel powerful.

We too, were amazed to see this striking transformation. One moment Aditi was being her low key self, prancing around PORT, quietly fixing the pallu of her sari, indulging in casual banter with her bandmates – AC, Bijit, and Ishan. The next moment, the camera was rolling, the lights were on her, and she metamorphosed into this strong, grounded, powerful presence – belting out classical aalap along with jazz improvised vocals. She was striking.

“It’s always a balance of being yourself – being awkward – and then hitting that flow. Whenever I’m on stage singing, I like telling the stories behind the songs. And that just comes from another place because you get into a different zone when you’re performing. It’s not even like I am speaking those things – it’s something else!”

We spoke to the quartet about their music, finding each other, performing together, Strandberg guitars, their lives in the city, and ‘family band’ vibes.

Aditi and Ishan had started out two years ago, playing together in a band called ‘Jastronaut’ which doesn’t exist anymore. Later, she met Bijit through common friends on social media. “Thank you Mark Zuckerberg (also for stealing our data!)”. *Laughs*

People who have interviewed Aditi have often found her really quiet and reserved, she shares. That’s how AC met her at the end of the first gig they played with Bijit on the Bass. Aditi remembers, “He (AC) had come for the gig. After the gig he came up to me and said, ‘You don’t have a guitarist on your band, I like it!’”. AC adds, “Yeah, I hounded on her. She was lonely and quiet and weird in the corner. Super by herself in the darkest corner you can imagine. And I walked up to her and said ‘Yeah I am playing with you now’. And she went ‘Ohh oookayy’. So, then that’s how it happened.” The Aditi Ramesh Ensemble was thus formed.

Their energy together is extremely lively and you can’t not have fun being around them – watching them break out into jumpy warm-ups and impromptu jams! “That’s just how we are – we need to turn it off. It’s like STOP! Stop doing the jumpy thing, we have to start (playing). But it’s never boring.” she exclaims. Drummer, Ishan Jadwani says, “It’s been close to one and a half years we’ve been playing together as a quartet, and it’s fun! It’s total madness when we are on tour. We are like family. A family band. We are having a great time.”

The two songs – ‘In The End’ and ‘Childhood’ – that they played for LIVE at PORT, are unreleased tracks that form the end and beginning pieces in a project that Aditi started working on with Anthony Cammarota aka AC.

‘Childhood’ is inspired from raag Gaavati which is the basis for the melodic improvisations, with some deviations. ‘In The End’ is not really based on any raag – it was driven more by western chords and melody, while the Tamil parts are carnatic influenced.

“‘In The End’ emerged through a side project I did with AC. It was initially a duo set with a beatboxer, because we didn’t have budgets. The project is conceived as a metaphor for the human life cycle, through a contemporary approach to carnatic influenced music”, Aditi explains.

“In The End is the last song of that set. It talks about the end of the human life cycle and how it mirrors the beginning – in essence how life is a circle.” There are some Tamil lyrics in the song which Aditi’s dad helped her articulate. They roughly translate to, “all of us are created in sound and light. We are all particles on a spectrum, and when those particles vibrate is when existence flows”. The track also explores waves of sound coming in – how sound and light together create existence. We are all part of that existence, one and the same. “That’s mainly the essence.”

Aditi had a basic idea for the track with keys and vocals, and AC added the guitar. “Then Bijit and Ishan sealed it up and made it complete with the rhythm sections – the backbone of any band,” shares Aditi. AC says, “I think I’ve figured out our bands formula. Aditi comes up with everything, right? Obviously. Then, I’ll look at it and I’ll change the harmonic structure. Then Ishan will change the groove. And then Bijit will do the final editing of the whole thing. And that’s it!”

“Basically anytime we play it (like with most of their songs) – someone will have a cool idea and we’ll just try it out,” adds Aditi. While playing the track at PORT they ended up adding a new rhythmic break – “Ya we did that thing just now! That’s the fun thing, those few people who come for every gig can really see the songs slowly evolve. That’s how a song evolves over time and has all these nuances and color.”

Their sound is a unique blend of carnatic and Indian classical, jazz, blues, soul, funk, and even a touch of gospel. “It’s really different from my perspective, coming in as an outsider I guess for the whole situation,” shares AC, a classical and jazz guitarist originally from California. “It’s been really cool for me personally, because we’re both approaching it from almost opposite ends of the spectrum. Coming into the carnatic elements of Aditi’s foundation, and then her adventure into jazz – it’s fascinating! It’s been nice, it’s a very open and receptive platform. I can take what I’m familiar with into it, but also exchange novel ideas that I’m less familiar with. Like how do melodies in the carnatic style work as opposed to a Jazz background? My foundation is in harmony – which for Aditi’s background is absent virtually. It’s just melody and rhythm. So it’s really good that these missing pieces can come together to form a really good blend.” “That’s what creates (our) sound, all of us learning and growing from each other,” adds Aditi.

Aditi hates using the term ‘fusion’. “People hear ‘fusion’ and they’re like ‘Oh it’s going to be some aa-aa-aah, and some shu-be-dooba ’. The point is not to have two different parts like that, but to find the places where both can meld into one another seamlessly.” says Aditi. “This will be a life-long exploration in the infinite number of ways that you can do that.”

For Aditi, songwriting is a personal process, and she initially writes alone. “I feel like for me the lyrics and the message drives the music and feel, and that’s very personal. Then I take it to the band and it gets more fleshed out. But initially yeah, I write alone. In fact, that’s how I’m different as a musician and in real life. In real life I don’t share with people what I actually think. I’m a very private person. I don’t share my emotions, my personal life. But in my songs, I’m very out there – vulnerable. It’s me at the deepest level.”

Aditi left a career as a corporate lawyer to pursue music full-time in 2017. “I did music as a kid, and then I was very out of touch for about ten years. When I started out I just lived everyday for the day, I didn’t think ahead beyond maybe a week. So I honestly can’t believe everything that has happened. I didn’t have any particular goals like I want to perform on this stage, nothing. I just wanted to get into the music, which I had lost touch with. It’s only been three years, so I’m still very new. It still feels unbelievable.” Although her family didn’t initially take the switch too well, they eventually came around. “It’s not just playing in pubs and being a loose cannon. They see that now and are much more supportive. I’m actually disciplined about what I am doing and it’s a profession.”

She is very particular about rigor and riyaaz. “Morning, mornings, every morning. It’s the first thing after I’ve brushed my teeth, freshened up – then practice. After that, I eat breakfast. On a free day I like to do 1.5 hours in the morning, 1.5 hours in the evening. Mornings is mostly just exercises and basics. Evening is for improvisation and songs. I would like to do more, but as of now this is it”. We asked if she ever gets lazy, and she exclaimed, “OF COURSE, all the time. It’s like exercising, you know! You get enthusiastic and you do it. And then you get lazy. You have to motivate yourself out of that.”

Speaking about the city, they all agree that it pushes you. All four of them moved to Mumbai at different points in the past five years. Aditi is from Bangalore, and she says “when I’m home it’s too comfortable, and I’m not inspired or pushed to do what I have to do. This city, it simultaneously inspires you and it’s also heart-breaking at times. It’s so difficult to survive, to make your rent, to hustle, to go up and down on the trains, pick up any kind of random, odd work to make ends meet!” This feeling resonates throughout the group, but there’s also a sense of community in that. “The thing is everybody is struggling, we’re all in the same boat. So when you feel like it gets too difficult – you have people around you who are going through the same thing.  AC adds, “the intensity of the city’s vibrance really pushes you to excel beyond your limits. Here, you have to get on it, or you’ll be thrown into the Mahim Bay!”

Bombay’s vibrance and intensity, especially through commutes on the Mumbai local have also seeped into Aditi’s music. “I see music and sound in colors and visuals,” Aditi says. “So when I am on the train, suddenly it takes you away and I can see notes and patterns coming out in colours.” Aditi is a synesthete. Synesthesia is a condition involving crossed sensory wires in the brain, where stimulation of one sense automatically evokes a perception in an unstimulated sense (e.g. the sound of a bell triggers seeing the color blue). Synesthetes could hear sounds from images, see colors from music and so on. Aditi has, in fact, created a series of paintings, along with her new set that she calls “source material”. Each painting is a personal, visual interpretation of one of the tracks. “It all kind of comes together when I’m on the train, just sitting there in motion.”

Bijit points out how “the sea is a very exclusive thing for the city. As soon as you’re tired or frustrated, you can have a quick escape to the sea, refresh your mind and then start again. Bombay is always on the run and the running also has a rhythm to it. It’s musical.”

Ishan unabashedly admits he always had “Bombay Dreams” since he was a kid. ‘I’m so glad that they’ve come true, so grateful to the universe. Isn’t it wonderful that you get to do what you want to, everyday? Everyday is a party and we’re so blessed bro!”

The Aditi Ramesh Ensemble is playing at G5A Indie Music Thursdays on Dec 12, 2019. Aditi Ramesh is presenting an evening of unheard material, a tribute to the inspirations and influences that shape her sounds. She explores her “source material”, presented through the lens of her current and ongoing musings. See you at the G5A Black Box! 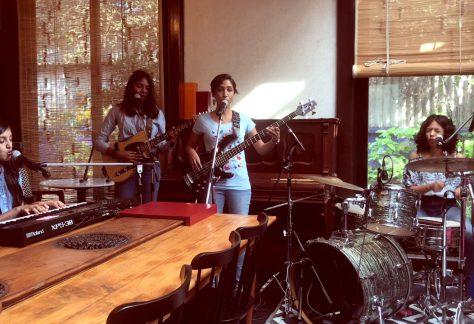 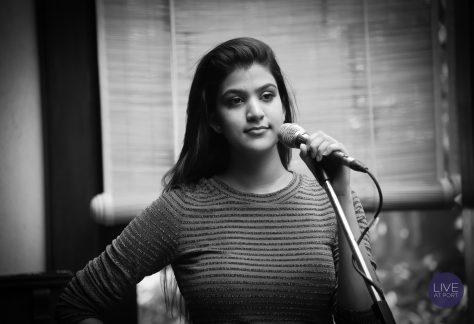 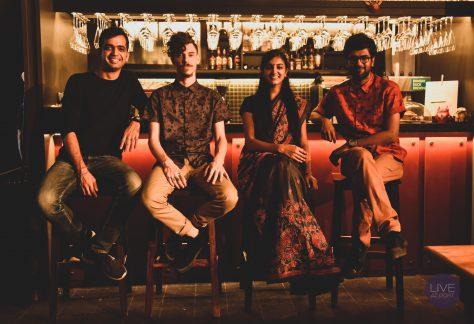 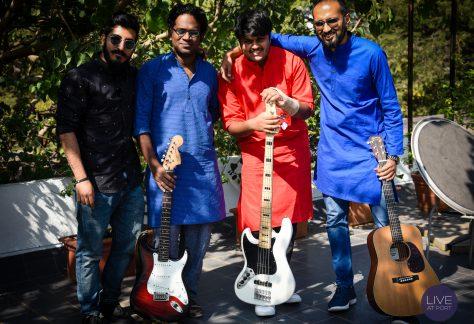