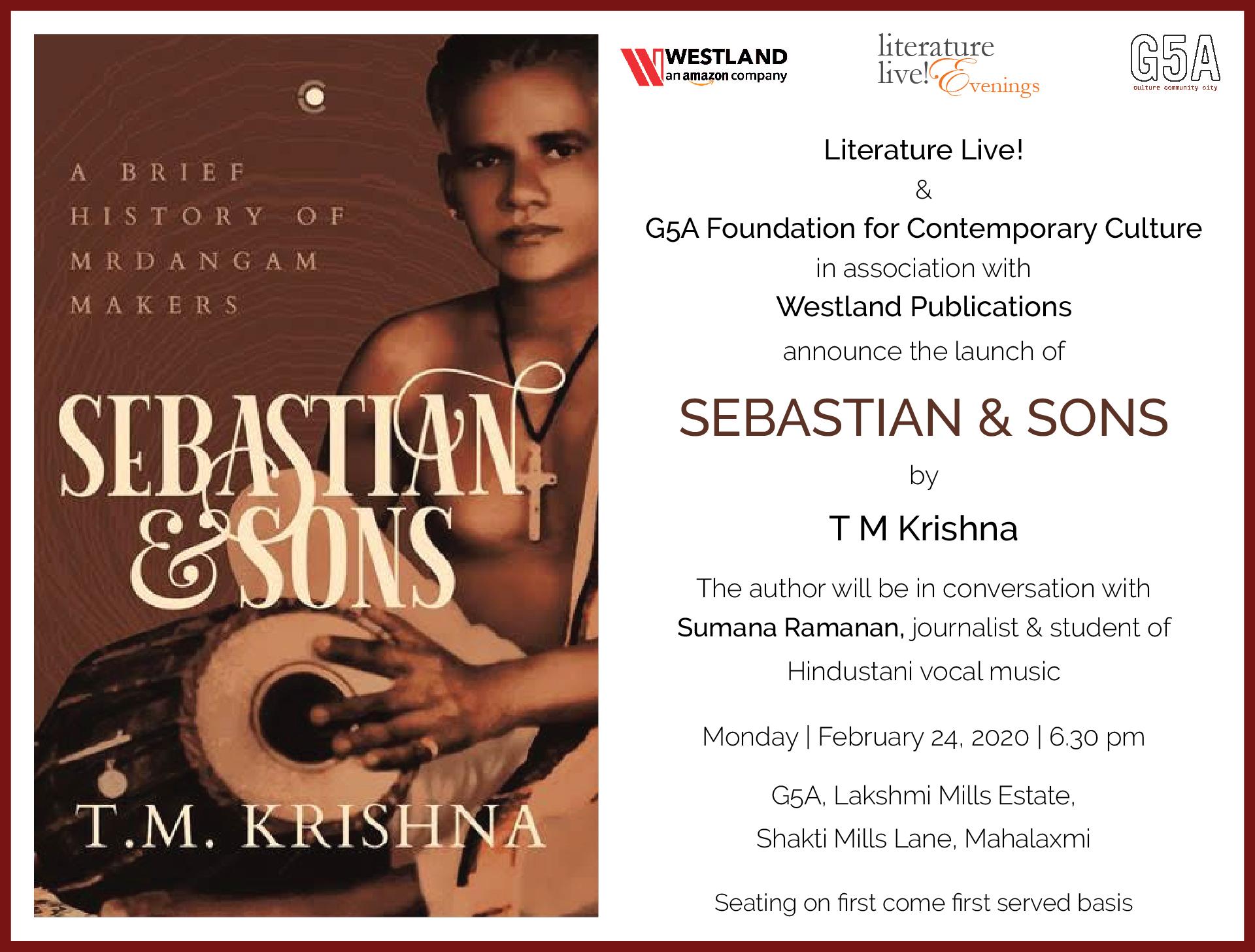 Join us for the launch of musician and activist T.M. Krishna’s new book – Sebastian and Sons: A Brief History of Mrdangam Makers – where he investigates the history of the mrdangam and meets the invisible keepers of a tradition: the mrdangam makers.  The author will be in conversation with Sumana Ramanan, journalist and student of Hindustani vocal music. Presented by Literature Live! in association with G5A.

Entry free and open to all. RSVP on Insider.in!

About the book:
Musician and activist T.M. Krishna investigates the history of the mrdangam and meets the invisible keepers of a tradition: the mrdangam makers.

The mrdangam is an integral part of the Karnatik stage, its primary percussion instrument. Yet, incredibly, the instrument as we know it is just over a century old. While several mrdangam players have been credited with the evolution of the instrument, none of them had knowledge of a fundamental element of its making: skin. The nature of the animal hide and how it is worked with impacts the tone, timbre and sound of the instrument.

The making process is intellectually, aesthetically and physically taxing. From acquiring the skins for the circular membranes and straps to sourcing the wood for the drum, curing the material, the final construction, and at the end of it all, making sure that it has the required pitch and tone, mrdangam-making is a highly nuanced operation at every stage. Translating the musician’s abstract ideas into the corporeal reality of a mrdangam requires a highly tuned ear. Yet, the makers’ contribution to the art of the mrdangam is dismissed as labour and repair—when it is spoken of at all.

There have been legendary mrdangam players, yes; there are also distinguished mrdangam makers, many of them dalits, but they remain on the fringes of the Karnatik community. Sebastian and Sons explores the world of these artists, their history, lore and lived experiences to arrive at a more organic and holistic understanding of the music of the mrdangam.

About the author:
T.M. Krishna is a vocalist in the Karnatik tradition. Uncommon in his rendition of music and original in his interpretation of it, he is at once strong and subtle, manifestly traditional and stunningly innovative.

Krishna is also a prominent public intellectual, writing and speaking on issues of structural inequality and culture. He is the driving force behind the Chennai Kalai Theru Vizha (formerly Urur Olcott Kuppam Vizha) and the Svanubhava initiative. He has been part of inspiring collaborations, such as Chennai Poromboke Paadal, performances with the Jogappas who are traditional transgender musicians, the Karnatik Kattaikuttu that brought together art forms from two ends of the social spectrum, and an enduring poetic partnership with Tamil writer Perumal Murugan.

Krishna is the author of A Southern Music: The Karnatik Story (HarperCollins, 2013), which won the 2014 Tata Literature Award for best first book and Reshaping Art (Aleph, 2018). He also co-authored Voices Within: Carnatic Music—Passing On an Inheritance.