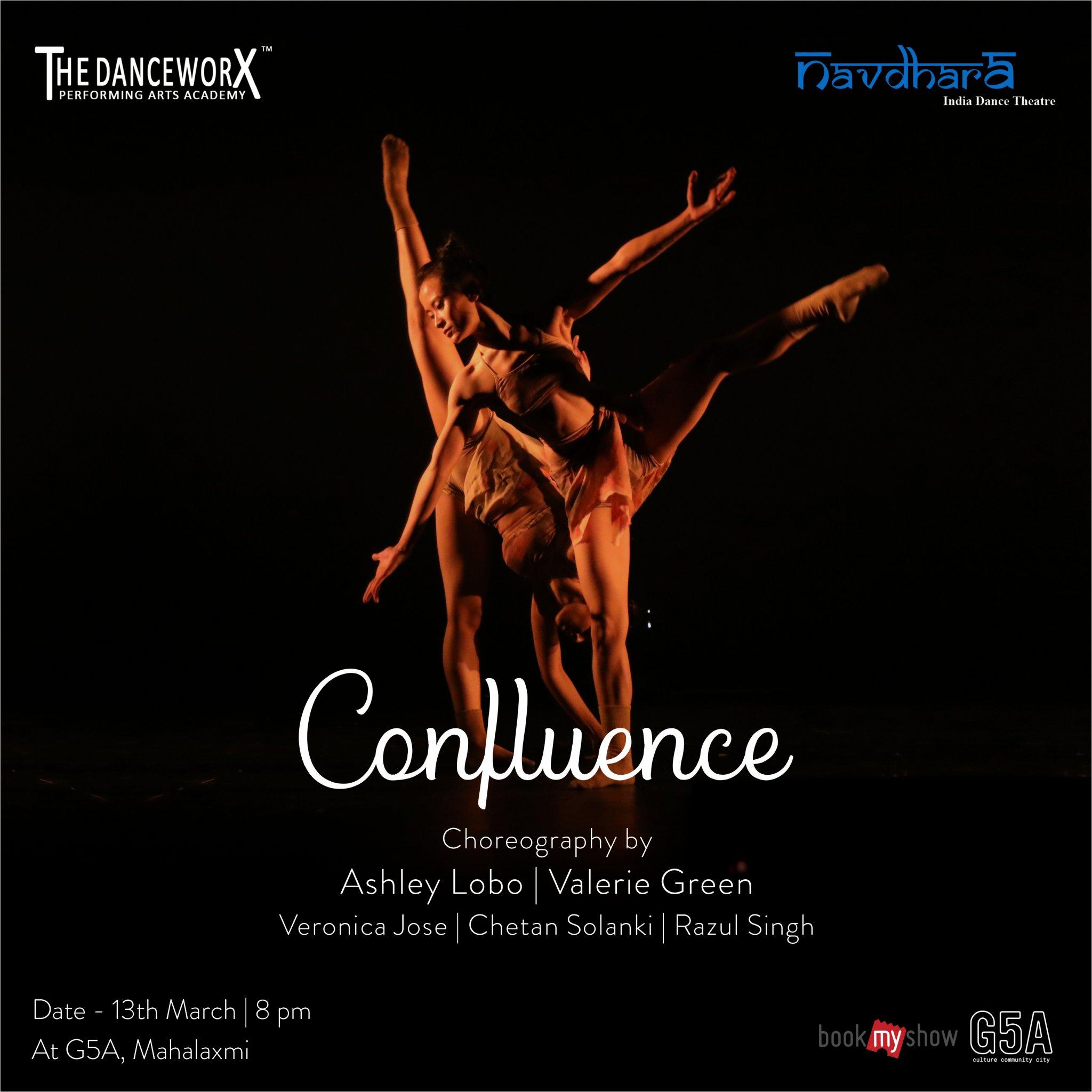 1. Excerpt of OM by Ashley Lobo (15 min)
The piece titled “Om-1” is a work in progress. It is one part of a 3 piece full-length larger piece titled “Om” to be premiered later this year.

“Om” is about the all. Good, bad, dark, light, right, wrong, etc. It is based on the thought that all exists as one. Everything just is. The acceptance of the all is acceptance of the totality of the self, physical and metaphysical, bereft of separation or judgment. It is with this thought that the piece was conceived. It is born of the belief that all has always existed and always will.

2. The War Within by Valerie Green (15 min)
A new work choreographed by Valerie Green developed in residency with Navdhara India Dance Theater looks at the ideas of resistance, surrender, power and boundaries. Exploring dynamics of the individual’s psyche and how it plays out inside a group dynamic.

3. Gender by Veronica Jose (5 min)
The constant battle of the sexes for superiority, equality and staying relevant in various professional and private spaces. The piece questions whether a feeling of individual self-sufficiency should even raise the issues of which gender trumps which, when we all are the same flesh and bones.

4. Communication by Chetan Solanki (5 min)
The fears and worries that hinder our attempts at clear communication, its importance for an individual as well as relationships and the eventual growth and positivity achieved when effective interaction takes place are all portrayed through this piece.

5. Expectation by Razul Singh (5 min)
The journey of personal growth, through the positive and into the inevitable negative, which creates a new, mature individual and a new perspective on life and its many facets. The piece portrays the longstanding and ever-evolving highs and lows of one’s emotions.

Ashley Lobo is considered to be a spearhead of international dance in India. He is the Founder & Artistic Director of The Danceworx Performing Arts Academy and Navdhara India Dance Theatre. His career in performing arts comprises of over 32 years of performing, choreographing, and teaching – both in India and International. He trained in Sydney, Australia at the Bodenweiser Dance Centre. Ashley has developed Prana Paint™, a unique sensitizing approach that explores movement through yoga, breath, connectivity, and touch. This unique technique has put him on the international map and has led to him being invited overseas to conduct workshops and to choreograph. The latest being his full length works with Ballet Chemnitz (Germany) and the Linz Ballet, TanzLin.z (Austria). He has now been commissioned to premiere a new work by the TanzLin.z (Austria) in May 2021. Ashley has choreographed extensively for stage and cinema, with over 30 Bollywood feature films and as many stage productions to his credit. He has also been a judge on India’s Dancing Superstar, a competitive dance reality programme on Star Plus.

Valerie Green has been an active dancer, choreographer and teacher in the New York City dance community since 1995. She created her own company, Dance Entropy in 1998, adding a permanent company home in 2005 called Green Space. To date Ms. Green has created 39 dances including 10 evening length works. Her choreography has been seen throughout NYC and in venues throughout the US. Internationally, Green has toured to Albania, Armenia, Austria, Azerbaijan, Bosnia, Canada, Croatia, France, Georgia, Greece, Guatemala, India, Italy, Poland, Russia, Serbia, Slovenia, Sweden, and Cuba both as VG/DE’s artistic director and an individual teaching and performing artist.

Veronica P. Jose‘s career in the performing arts comprises of over 21 years of experience in learning, performing and teaching in India including 7 years of experience as a choreographer. She is trained in Indian Classical ‘Bharat Natyam’ for 12 years under Guru Ravi Sharma, founder of Art Society Mumbai. She is also trained in Classical Ballet, Jazz, Contemporary and Urban at The Danceworx Performing Arts Academy under the Artistic director and Choreographer Mr. Ashley Lobo. Currently she is a company member of the Navdhara India Dance Theatre, a contemporary based company. She has toured extensively with NIDT for 6 years, performing in the United States, Israel, Germany, Poland, China, Taiwan, Canada, Mexico, Turkey, Bahrain.

Chetan Solanki is a dancer/ choreographer/ teacher from India and currently he is a principal dancer of Navdhara India Dance Theatre (NIDT).Chetan started his dance training/education in 2010 with The Danceworx Performing Arts Academy, in which he trained in jazz, ballet and contemporary. In 2013, he joined a training project called Going Home. In 2014, he started his professional dance career with (NIDT). Since then he has traveled and performed in countries such as USA, Israel, Canada, Germany, Poland, South Africa, Mexico, Turkey, China, Taiwan andBahrain with the company. He is one of the chosen dancers for The Crossing – India/Poland Collaboration Project between NIDT and Zawirowania Dance Theatre Company, which took place in both Mumbai and Warsaw.Since the past 6 years he also attended intensive classes with International teachers and choreographers around the world. He was part of the team that started an event called Platform Dance under the supervision of the artistic director Mr. Ashley Lobo and the assistant Artistic director Ms. Yuko Harada which gave an opportunity to all the upcoming dancers, choreographers and artists to showcase their work.

Razul Singh started his dance journey in Kanpur in 2012. He shifted to Mumbai in 2013 for his further studies. In 2014, he started his professional career in dance with company name Navdhara India Dance Theater. He is trained in Classical Ballet, Jazz, Contemporary and Urban at The Danceworx Performing Arts Academy under the Artistic Director and Choreographer Mr. Ashley Lobo. Currently he is a company member of Navdhara India Dance Theatre, an artistic contemporary company. He has toured extensively with NIDT for 6 years, performing in the United States, Israel, Germany, Poland, China, Taiwan, Canada, Mexico, Turkey and Bahrain.