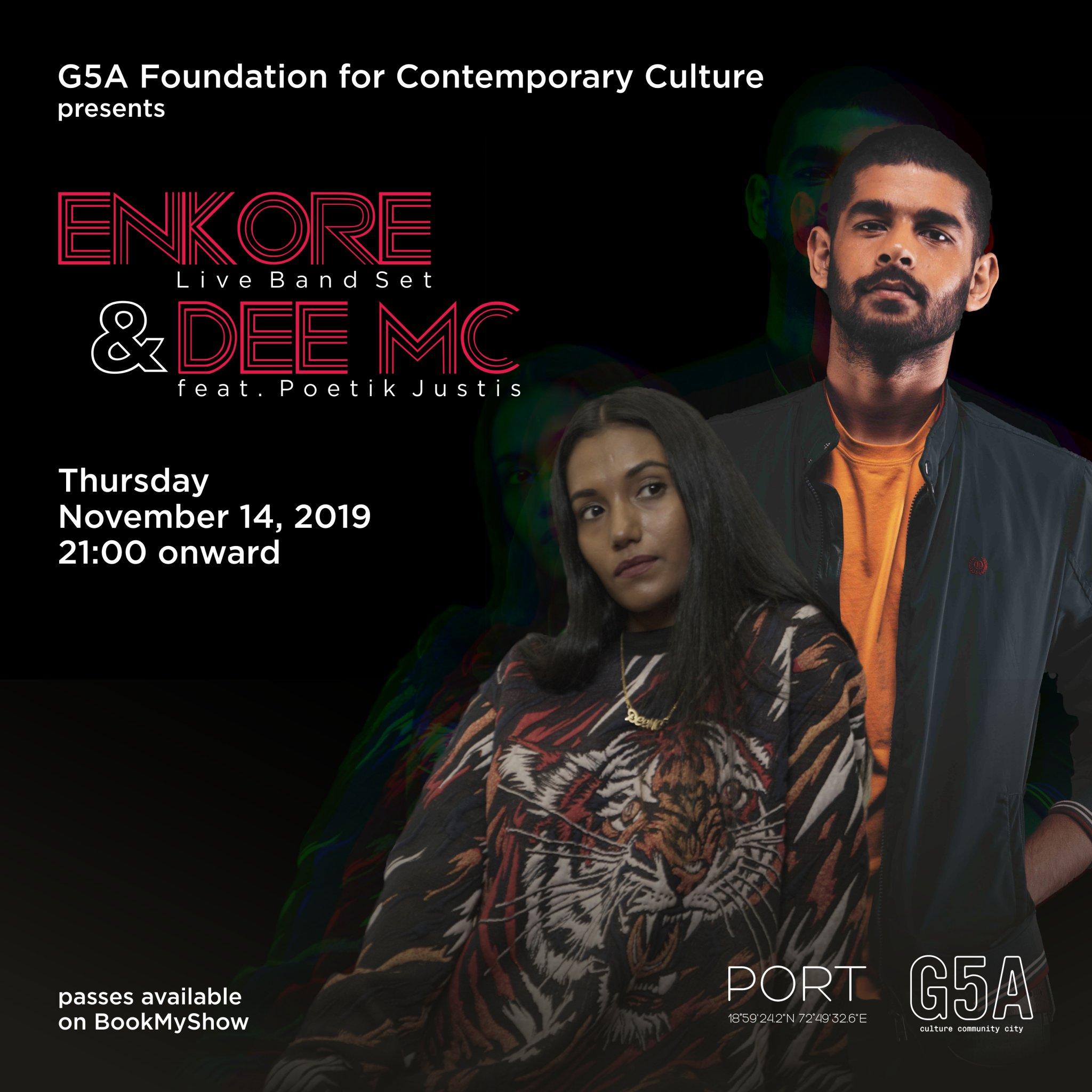 The Indie Music scene today is extremely vibrant and innovative and so we’re very excited to be dedicating one day every month that will feature a strong line-up of acts both Indian and International.

This November we are excited to present an indie music evening dedicated to hip hop with Enkore and Dee MC (feat. Poetik Justis) LIVE at the G5A Black Box!

Get ready for dope beats paired with fiery, relatable, and introspective lyrics that take you on a journey from the personal to the political!

Join us every third Thursday of the month for a new artist line-up at Indie Music Thursdays!

Enkore, is a bilingual (Eng/Hin) hip-hop artist from Mumbai known for his unique style, approaching Indian middle class realities with brutally honest introspection, leading to music that draws from Indian classical and Sufi, to Trap and Soul. One of the most consistent and well-rounded Indian rap artists, he’s gained notoriety through his 2 independent albums, a variety of initiatives within Indian hip-hop, collaborations both within and outside of it, and a range of commercial projects – from movies to brand collaborations and campaigns.
His new album #BombaySoul is available worldwide for streaming at geni.us/BombaySoul

Deepa Unnikrishnan aka Dee MC is a 25 year old rapper and singer-songwriter from Mumbai. Starting her journey in hip hop through dance, she gradually fell in love with the genre’s music and started writing her own raps in 2012. Her music reflects her own journey and at the same time is also socially aware. Today Dee MC is a renowned face in Indian hip hop having worked with several brands, as well as appearing on film and television. She has previously represented India in the UK at Alchemy, in Belgium at the all female festival La Bella Hip Hop, as well as Desifest in Canada. Dee recently appeared in the film Gully Boy as herself, and has also sung and rapped for the Bollywood hits such as ‘Jagga Jiteya’ from URI and ‘Shuru Karein Kya’ from Article 15. Dee MC is also the editor in chief of the leading South Asian Hip Hop news website DesiHipHop.com. She launched her debut album ‘Dee=MC²’ on October 30th, 2019.