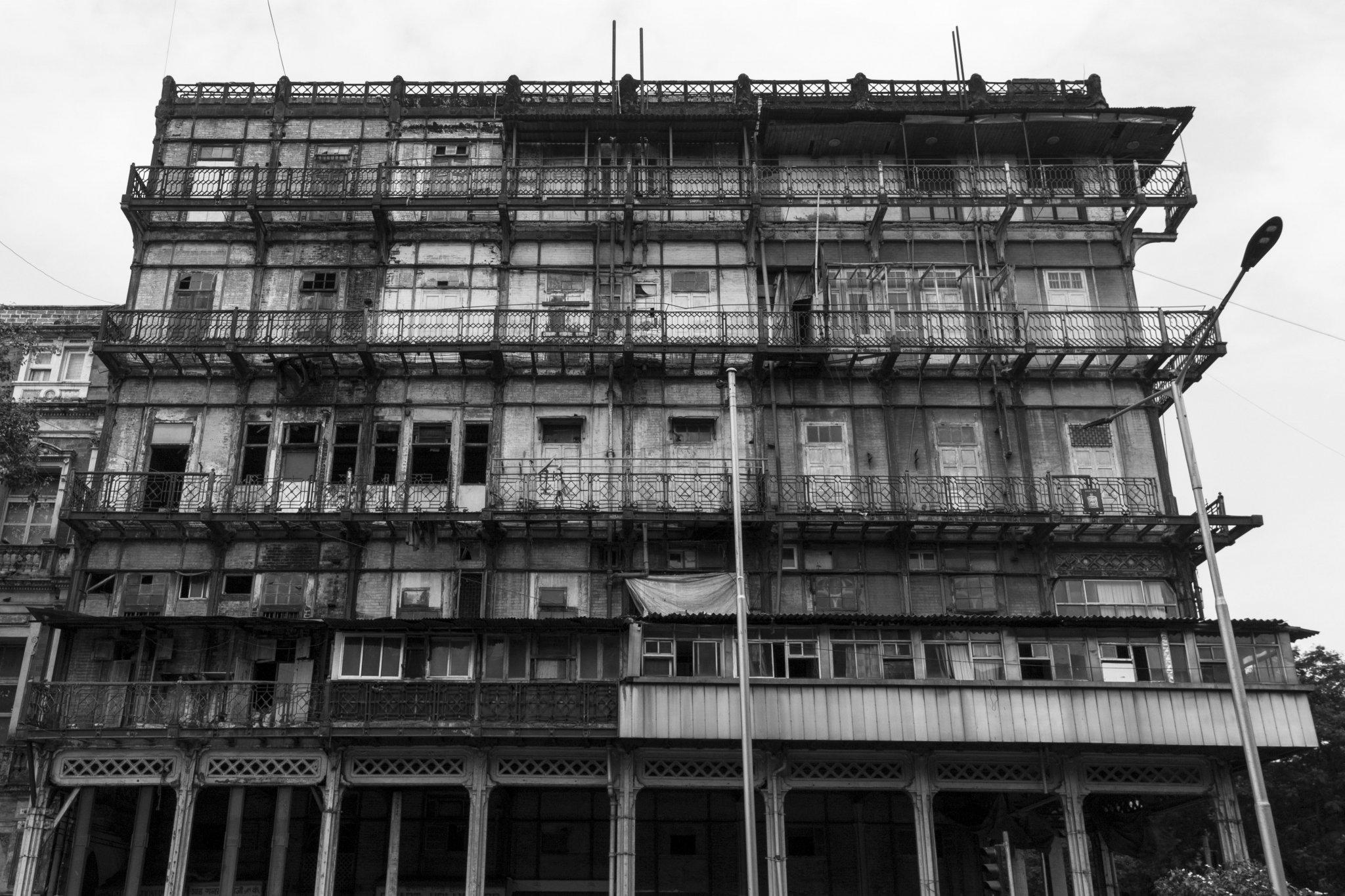 Photographing Esplanade Mansion was a race against time. Newspaper headlines and articles over the last few weeks have chronicled collapsing balconies, structural audits recommending demolition, and a High Court order from last month recommending safety precautions while bringing the building down. By the end of this week, the building will be covered in nets and boards in an important step for the safety of civilians. The last sight of this once magnificent building might be rather forlorn: a decrepit facade composed of a patchwork of cast iron pieces seen through a gauze-like barricade of ropes and bamboo.

Bombay’s history is bound up with demolition bequeathing new space. Fort George, built by the British East India Company, once extended from Victoria Terminus to the docks to Kala Ghoda to Azad Maidan. Although the walls of the Fort were torn down to make space for new land, the name has remained etched in our imagination to connote the city’s first business district. It was only after the ramparts were demolished in the mid nineteenth century that the potential of this site on the west side of the Esplanade abutting the Fort became evident.

An Englishman, John Watson, decided to bid for the parcel of land on which he would later design and construct India’s first cast iron building, which he eponymously named Watson’s Hotel. Its components were imported from England and assembled in Bombay. The luxury hotel was opened with much fanfare in 1871. Its early history was marked by events that make for wonderful stories: the city’s first film premiere, and visits from famous international writers who gazed at the Arabian Sea from their rooms and wrote pieces that added to the myth and lore of Bombay. Some of these stories are substantiated by archival material; others, of course, are apocryphal.

As part of a series of constructions in the late nineteenth century, along with Flora Fountain, Elphinstone College, the David Sassoon Library and the Bombay University, Watson’s Hotel played an important role in shifting conceptions of space in the town’s core area. As Rahul Mehrotra and Sharada Dwivedi note in Bombay: The Cities Within, “The most important public feature of the building was the arcade incorporated at street level, which made it totally contextual in spite of being constructed in such a different building material – cast iron.”

During the mid-twentieth century, Watson’s operations as a hotel wound up, and its once resplendent rooms were leased out to residential and commercial tenants while its exterior became dilapidated and neglected. Over the subsequent decades, the hotel was also sold and re-named Esplanade Mansion. The arcade and spaces on the street at ground level became homes to a plethora of stores, some of which offered “Xerox” and copy services, frequently used by lawyers from the nearby High Court. The last of the tenants packed up and left on 30th May this year, but Watson’s Hotel remains part of a UNESCO recognized heritage ensemble that includes the Bombay University Library, High Court, and Art Deco buildings around the Oval Maidan.

There is little doubt that a certain defining trope of Bombay’s history will play out on this site once again. Much like how John Watson opportunistically bid for the parcel of land on which he built his hotel when the Fort was demolished, there will be plenty of parties interested in the land on which Watson’s Hotel stands if it is razed to the ground. As conservation architect Vikas Dilawari noted in an interview with Indian online publication Scroll, “the trend is to let structures become so dilapidated due to the Rent Control Act that they fall, and then redevelopment is allowed with the incentive of higher FSI [floor space index].”

The situation epitomizes the state of heritage in the city with changing conceptions of space and land. Although there are some authorities and organizations like the Mumbai Heritage Conservation Committee doing wonderful work to issue guidelines on the preservation of heritage buildings, citizens also ought to start taking heed of the stories in stone that reflect our shared history. The urban fabric of Bombay would be incomplete without many spaces that we stand to lose today, often through willful neglect. Photographing Watson’s Hotel and other buildings in this series has been an attempt to join the dialogue about how we can ensure that some of the city’s iconic spaces aren’t relegated to history, or preserved solely in the realm of our memory.

These photographs have been used to create a series of digital artworks that aim to start a conversation about the fluid visual landscape of the Maximum City. They will be presented at a forthcoming exhibition at G5A