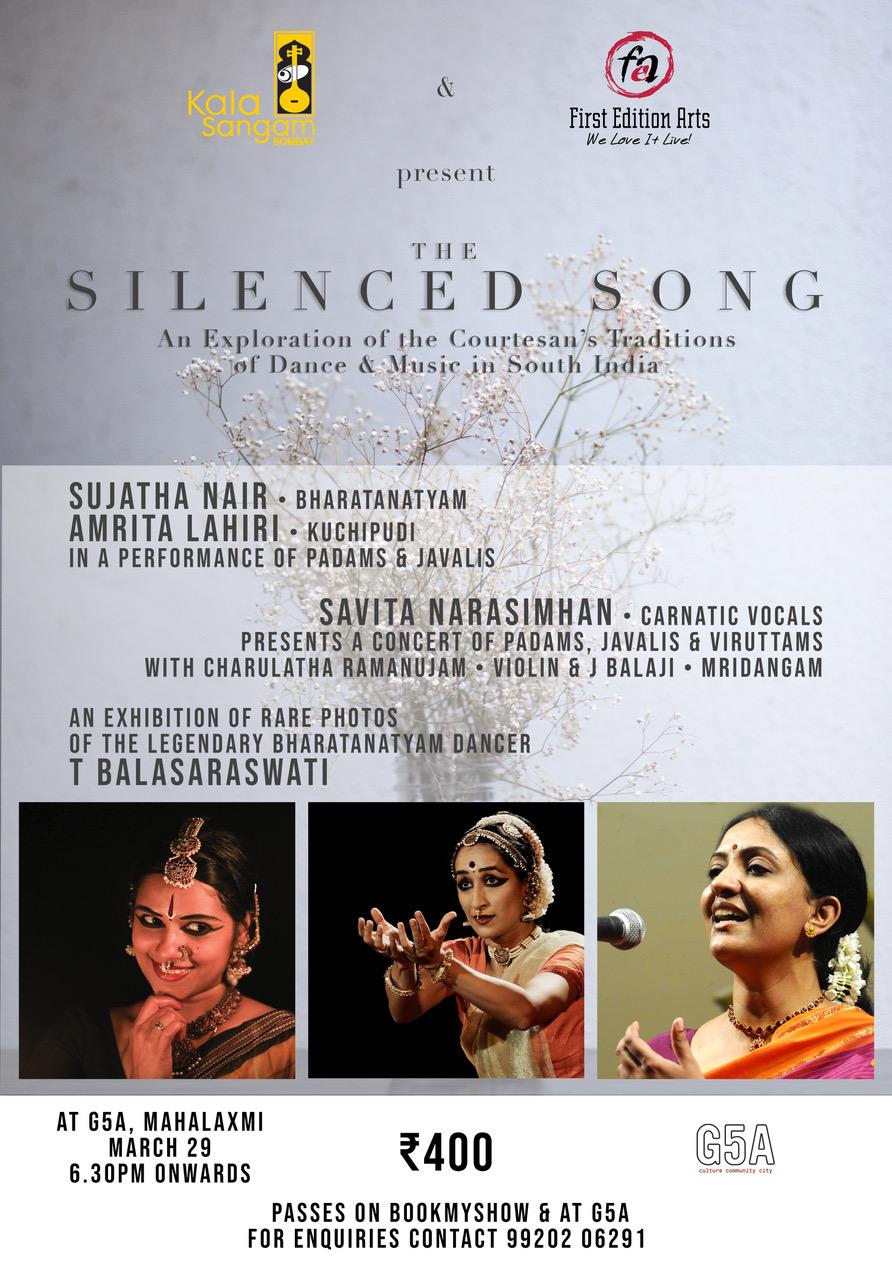 G5A is pleased to host The Silenced Song: an Exploration of the Courtesan’s Traditions of Dance and Music in South India – an evening that brings together the three art forms of Carnatic music, Bharatanatyam and Kuchipudi dance and an exhibition of rare photography of the legendary Bharatnatyam dancer T Balasaraswati (1918-1984). The program is jointly presented by Kala Sangam (Bombay) and First Edition Arts.

The evening begins with a dance performance of padams and javalis by Sujatha Nair [Bharatanatyam] and Amrita Lahiri [Kuchipudi]. The dancers will present pieces individually as well as jointly, complementing the aesthetic features of their respective forms. A live music orchestra will accompany the dancers.
Followed by Chennai based Carnatic vocalist Savita Narasimhan presenting a concert of padams, javalis and viruttams along with a narration on the contexts and nuances of the music and song texts being presented. She will be joined on violin by Charulatha Ramanujam and on Mridangam by J Balaji.

The Silenced Song refers to the music, specially the padams and javalis that were part of the devadasi’s repertoire. Courtesans, called devadasi in the South and tawaif in the North, were highly skilled performers, who came into particular eminence in the Indian courts of the 17th – 19th centuries. They sang, they danced and were the last word in good taste and high fashion. The padam and javali were part of the devadasi’s repertoire, when she performed at the temple and the royal court. The song-text of these compositions usually carried a more complex emotive content in being both devotional and erotic, produced at the intersection of the Bhakti and courtly poets. This richness of content facilitated the interpretive dance-acting of the courtesan and this genre blossomed as a highly intellectual and classicized performative form.

However, by the late 19th and early 20th century, loss of royal patronage, imposition of Victorian codes of morality by missionaries during the British rule and the puritan censorship enforced by the nationalists took their combined toll and led to the de-humanisation of the courtesans. With the devadasi tradition falling into disrepute, padams and javalis moved into the milieu of love compositions that sit awkwardly and unsurely in the sanitized Carnatic concert format – devoid of the seductive playfulness, tease and dramatic pursuit, and rendering the spiritual incomplete in the elimination of the erotic. The courtesan’s song, thus, was a sacrifice in the altar of the nation-mother, enabled by the high priests of nationalism. And the courtesan, one of the many dispossessed daughters of the nation-mother.

Today mainstream Carnatic music is identified with bhakti, devotion to the chosen God. ‘The Silenced Song’ features another strain – where the high classicist style spells sheer romance, with a selection of compositions of the Carnatic composers of shrngara or romantic poetry. Paradoxically, these moods of enchantment, agitation and anticipation, imaged by women in love, are refracted through the gaze of male poets like Kshetrayya and Dharmapuri Subbarayar – but traditionally sung and danced by women artistes from the community of hereditary practitioners, dating back centuries.

Savita Narasimhan, Carnatic vocalist, stands prominent among vocalists of her generation, owing to her sensitive and nuanced rendering of ragas. With a pitch-perfect voice of rare emotional appeal to the connoisseur and common man alike and a family legacy of music lovers, Savita has had the musical upbringing that many vie for. She has two decades of experience as a Carnatic vocalist and is also an A-grade artiste of All India Radio and Doordarshan. She sings extensively for Indian theatre and classical dance as well.
Savita is a recipient of the Kalki Krishnamurthy Memorial award, Sangeet Natak Akademi’s Bismillah Khan Yuva Puraskar and Shanmukhananda Sangeeta Sabha’s Sangeeta Shiromani, among others. Her brainchild, MOPA (Museum of Performance Arts) is a wide umbrella under which one can experience artistic and cultural orientation of South Indian culture.

Amrita Lahiri is widely recognised as one of the foremost young performers of Kuchipudi today. Critics describe her as “gifted with a radiant stage presence” and her dance performances and choreographies have been acclaimed for their elegance and dynamism, combined with a refined approach. She has toured as a soloist in India, USA, Switzerland, South Korea, Africa, and Southeast Asia, presenting Kuchipudi from its traditional origins to its contemporary forms. She presents the beauty and joy of dance, while maintaining the precision and soul of the classical Kuchipudi form. Amrita began dancing at age 7 in Washington, D.C. studying under Anuradha Nehru until she shifted to New Delhi at age 15. After her solo debut at the India International Centre in New Delhi in 1996, she continued to perform Kuchipudi, and also started learning Bharatanatyam under Leela Samson. Amrita toured extensively with Leela Samson’s group Spanda, performing with her guru. While in New Delhi, Amrita studied under Swapnasundari and Seetha Nagajothy. In Chennai, she studied under Jaikishore Mosalikanti. Her dance reflects the influences of all of these outstanding gurus, and the experience of many performances.

Sujatha Nair Sanjay is the daughter and disciple of Smt Jayashree Nair founder director of Upaasana and has been learning Mohiniyattom and Bharatanatyam from her mother for nearly three decades. She is also learning Odissi from Smt. Debi Basu and has numerous performances in all the three styles to her credit. Sujatha has been performing on prestigious stages, in and outside Mumbai, and at festivals like Ananya Festival, Khajurao Festival, Kalaghoda Festival, Mumbai Festival, Elephanta Festival, Sirpur Festival, Girnar Mahotsav, Mudra Festival etc. to name a few. She is also an accomplished Carnatic singer having trained under late Guru. T R Balamani and is a national scholarship recipient. She has been conducting dance recitals and has recorded numerous songs. She is a recipient of the Government of India Scholarship for Bharatanatyam and is an A grade artiste of Doordarshan.